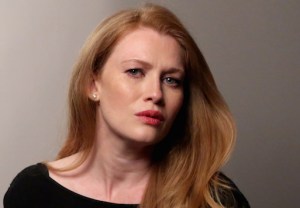 Mireille Enos is relocating from damp and dreary Seattle to twisty and turny Shondaland.

The former Killing sleuth has signed on to headline The Catch, a potential new drama series from Shonda Rhimes and Betsy Beers’ factory of hits, TVLine has learned.

Penned by Hannibal scribe Jennifer Schuur and based on an idea by novelist Kate Atkinson and Helen Gregory, the pilot centers on Enos’ Alice Martin, a woman about to get married and conned. Unbeknownst to her slippery fiancé, Alice — who investigates fraud for a living — is not all she claims to be. And when the fiancé’s expertly planned con collides with her perfectly constructed lies, they plunge into a dangerous game of cat and mouse.

Enos is coming off of a four-season stint on The Killing. Prior to that she co-starred in HBO’s Big Love, which, coincidentally, is where Scuur got her start as a TV writer.