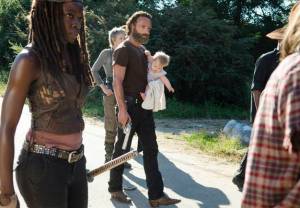 If I were Rick, I’d have been hanging a “Home, Sweet Home” sign in the Alexandria Safe-Zone before the gates had even shut behind me. But in this week’s episode of The Walking Dead, he (and a few key members of his ragtag band) instead looked upon the pristine community with as much skepticism as optimism. Were they right to be suspicious? Or had their time outside made them paranoid? Read on and decide for yourself.

CHECK-IN TIME | Picking up where “The Distance” left off, with our heroes about to pass through the gates, “Remember” began with Daryl getting spooked by a sound and putting an arrow through a possum. “We brought dinner,” he deadpanned to gatekeeper Nicholas. Next, Rick spotted an approaching walker — sorry, are they roamers now? — and had Sasha put a bullet in its brain. “It’s a good thing we’re here,” he said. And their welcome wagon, former Ohio Congressperson Deanna Monroe, agreed. Videotaping their conversation for transparency’s sake, she explained to Rick that he and his group were in a planned community (whose pre-apocalypse motto had been “the start of sustainability”) and revealed that they were the first people that she’d considered allowing in in ages. In response, he advised her to keep the gates closed — people on the outside are always looking for an angle that they can exploit. Is that what you’re doing? she asked. “Or are you already looking after this place?” Certainly, she hoped for the latter, because, as she put it, “I want you to help us survive.”

HAUNTED HOUSES | Once the gang had handed over their guns — a prerequisite for sticking around even for the day — Aaron showed them to their new homes. Plural. Yes, they got not one but two McMansions. And, as neurotic as Rick might be, even he couldn’t resist taking a shower, his first in heaven knows how long. (Hallelujah! He also finally hacked off his Yukon Cornelius beard!) No sooner had he finished — he hadn’t even put his shirt back on — than pretty, friendly Jessie came knocking on his door with sundries and an offer to give him a haircut. (It had been such an eternity since Rick had felt human that he actually shed a tear as she snipped away.) Later, it became clear that he wasn’t the only skeptic among them — Carol and Daryl had their doubts, too. So that night, all 15 of them would sleep in the same living room rather than be split up in two houses, Rick decided. Though Michonne was loving Alexandria — she spent 20 minutes brushing her teeth — she supported his inclination to play it safe. Still, “I have a good feeling about this place,” she insisted. When Deanna dropped by at bedtime, she was charmed to find the “family” camped out together. (And how many of us didn’t share her reaction to seeing Rick clean-shaven? “Wow.”) Before leaving, she mentioned that she had jobs for Rick and Michonne, she just hadn’t told them yet what they were. Hmm…

UNEASY DOES IT | The next morning, no sooner had our regulars set out to explore the place than Rick had misplaced Carl and Judith. (D’oh!) But his freak-out was mercifully brief: Jessie not only correctly guessed that neighborhood old-timers Bob and Natalie had called the kids over to pinch the baby’s cheeks, she also set up a play date for Carl and her older son, Ron, who introduced him to his pals, Mikey and detached instacrush Enid (who’d also come from “outside”) — and reintroduced him to videogames. “I like the people” here, Carl later told his dad, “but they’re weak.” And he didn’t want to lose his edge. That night, for the second time, Rick couldn’t sleep. Neither could Michonne, prompting her pal to ask why, if she wanted a job from Deanna and wanted so badly to buy into the hype, she was still awake? Following their chat, Rick tried to walk off some nerves with a moonlight stroll and had a run-in with Jessie’s husband. (Given how creepy he seemed, it’s no wonder she hadn’t mentioned him. And was it a coincidence that, in the very next scene, Carol lied in her interview with Deanna about how much she missed her abusive husband, Ed?)

THE NEW NORMAL | Turned out, Carl didn’t have to worry about losing his edge. The following day, when he followed Enid into the woods (and promptly lost track of her), and Rick went after that gun he’d stashed in a blender (gone!), the father/son duo took out half a dozen walkers without the use of any firearms. Nearby, Glenn, Tara and Noah were on a scouting mission with Deanna’s son, Aidan (who looked too much like the preppie villain in every teen movie in the ’80s not to hate him), and Nicholas. It did not go well. Besides the fact that ex-ROTC cadet Aidan was obnoxiously alpha male, his vendetta against a walker damn near got Tara killed. (To his credit, he did say — in so many words — that he was aware he was a d-bag.) By the time they all made it back to the gates, it was obvious that Glenn and Aidan were not and never would be buddies. “Why’d you let these people in?” Aidan yelled at his mommy. “Because,” Glenn replied, “we actually know what we’re doing out there.” And boom! Fists were flying, Daryl was jumping in, and Rick was breaking it up. When the dust settled, Deanna made an impromptu announcement to all within earshot: Rick and his crew were a part of the community, equals with everyone else. So there. She also revealed that the job she had in mind for Rick — and Michonne — was constable. “That’s what you were,” Deanna reminded him. “That’s what you are.” That night, Rick put on his sheriff’s uniform and told Daryl and Carol that everyone could sleep in their own home. No longer did he have any concerns about them getting weak. They were gonna make it work there just fine. As for their neighbors… “If they can’t make it,” he said, sounding scarily like the Governor, “then we’ll just take this place.”

OK, your turn. What did you think of the episode? Were you shocked to hear how willing Rick was to pull a Governor on Deanna and Aaron’s community? Hit the comments!