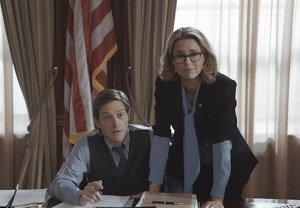 Madam Secretary‘s Elizabeth McCord is always one cool politico, no matter what tricky feat of international diplomacy is demanded of her. But those behind the scenes of CBS’ Sunday-night drama admit that its Season 2 pickup last month provided a welcome respite from the nerve-racking renwal waiting game.

“It was a big relief to get it early,” executive producer Lori McCreary says with a laugh.

And now that the pressure is off the series’ team, they can focus on how it’s about to be on the Secretary of State herself.

In advance of the freshman drama’s spring premiere (Sunday, 8/7c), TVLine chatted with McCreary and Hall, as well as star/producer Téa Leoni, to find out what’ll happen in the next three episodes. (Think international intrigue related to the Marsh murder investigation, Henry’s continued intelligence pursuits and Elizabeth taking a scandal-sparked hit in the public eye.) Read on for the details.

TVLINE | What will these new episodes tell us about Secretary Marsh’s death and who was behind it?
HALL | That story ties into an unstable situation in the Middle East. We have parallel stories where there’s a political story that deals with that, and it actually ties into the mystery of what happened to Marsh. I don’t want to give away much more than that, because I don’t want to spoil it, but all roads eventually lead to a political story we’re also following.

TVLINE | Téa, I’m always struck by how Elizabeth seems to be able to handle any crisis with aplomb. But in the first episode back, she gets ambushed by scandal related to a microloan program she’s backing.
LEONI | I’m trying to remember. [Laughs] It’s really funny; if you’d asked me what we shot yesterday, I’d have a blackout. [Laughs] So you said “microloan,” and I thought, “Oh God, Barbara, jump in!” [Laughs]
HALL | She does get called out in the media. It’s an interesting turn of events.
LEONI | How Elizabeth deals with this is a really nice indication of Elizabeth’s unique sense of hope and promise and integrity that I really have come to love. I’m remembering a moment in it when you see her stand in a way that I found impressive, actually.
MCCREARY | What we’re featuring in Episode 14, because it felt like the right time to do this, is her relationship with her staff. We set up in the pilot that she inherited them, and now we’re midway in the season, it’s like, “What is her relationship with them? Are they her people? [Guest star] Kevin Rahm (Mad Men) is someone who comes in from the outside as a really seasoned voice of Washington to challenge Elizabeth on how she’s proceeding, putting all of her policies and principles under a spotlight. He comes in as the voice of reason with an edge and a sense of humor.
HALL | We love the fact that he’s a truth-teller in a way that some of her staff might not be able to do because they have too much at stake. He has nothing to lose.

TVLINE | Will we see his character again in the future?
MCCREARY | Yes, he will be seen again and in the future. [Laughs] 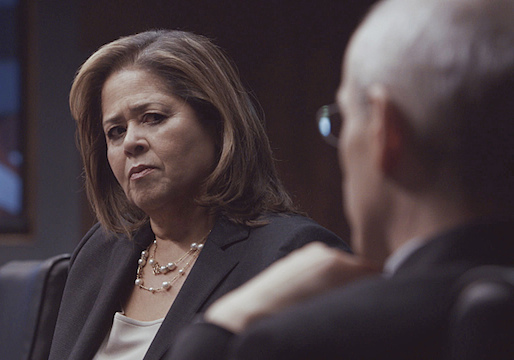 TVLINE | Speaking of guest stars, Anna Deveare Smith (Nurse Jackie) appears in the episode airing March 15.
MCCREARY | The great thing about Anna is that she’s the Attorney General, and she’s basically ready to do what the President orders her to do with characters that are coming under her purview. Elizabeth’s at the very center of all of this and having to serve up some of the characters we’ve grown to love — without giving too much away.

TVLINE | Henry agreed to the Klaus op thinking it would be one and done. I’m guessing that maybe it won’t be — and if not, will his increased work in that field become an issue in the McCords’ marriage?
LEONI | I think we would be remiss not to cover that. Any time you take on any job change, the ramifications of it in terms of schedule and time or money or whatever it is, is relevant to any marriage. But I think Tim [Daly] really said it well: These are two people who don’t hit below the belt, not with each other, anyway. [Laughs]
HALL | I’ll add to it that there’s a theme running through the second half of the season of what it looks like when people commit to a life of service… The rules are different. [Elizabeth and Henry] are burdened with these higher purposes. It’s the challenge of keeping their marriage healthy in the face of that, as Téa and Tim are saying, and making the fight fair. But the volume is turned up very high on their life situation.

TVLINE | Talk to me about Stevie, who’s had some trouble adjusting to her mom’s new gig.
HALL | Here, again, it’s the normal trajectory of a 21-year-old, which is challenging in its own right. But… it’s not just Henry and Elizabeth who live a life of service; the whole family has to. It’s just everything amped up because of her extreme circumstances. But otherwise, it’s recognizable behavior of a young adult trying to enter the world.
MCCREARY | The lives becoming public is also causing great consternation, both at work and at home. That’s kind of a running theme that’s gonna hit Stevie and the family.