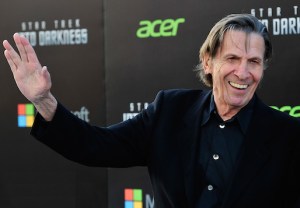 Star Trek icon Leonard Nimoy died at his Los Angeles home on Friday after a battle with chronic obstructive pulmonary disease, his wife Susan tells the New York Times. He was 83.

In addition to playing the U.S.S. Enterprise‘s highly logical Vulcan science officer Mr. Spock on the original Star Trek series — which next year marks the 50th anniversary of its launch — and its six big-screen continuances, Nimoy reprised the role in two episodes of Star Trek: The Next Generation as well as

The actor’s TV credits also included appearances on Fringe (as the nefarious William Bell), Mission: Impossible and the docuseries In Search Of… (which he hosted), plus voice work on The Big Bang Theory (as Sheldon’s Spock action figure), Star Trek: The Animated Series and The Simpsons (as himself).

“The word extraordinary is often overused, but I think it’s really appropriate for Leonard,” Star Trek costar George Takei said Friday on MSNBC’s Andrea Mitchell Reports. “He was an extraordinarily talented man, but he was also a very decent human being. His talent embraced directing as well as acting and photography. He was a very sensitive man. And we feel his passing very much…. And we miss him very much.”

Nimoy also worked as a director, helming films including Star Trek III: The Search for Spock, Star Trek IV: The Voyage Home and Three Men and a Baby, plus TV episodes of T.J. Hooker, The Powers of Matthew Star and others.

But perhaps most special of all, Nimoy, as Spock, showed little kids such as my younger self that, you know what, it’s kinda cool to be the smartest person in the room. Here, he explains the origin of the Vulcan salute:

Earlier this week, Nimoy shared this bit of poetry on Twitter:

A life is like a garden. Perfect moments can be had, but not preserved, except in memory. LLAP

Leonard Nimoy, without a doubt, lived long and prospered.