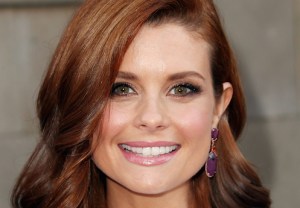 After dramatic turns as a mermaid and an astronaut’s wife, JoAnna Garcia Swisher‘s new gig will bring her back to her comedic roots.

The Reba alum has joined a CBS multi-cam comedy pilot written by and starring comedian Tommy Johnagin, TVLine has learned.

RELATED Pilot Season ’15: Your Guide to This Fall’s (Possible) New Shows, Who’s In Them

Swisher will play Michelle, a successful pediatrician married to Johnagin’s character, Tommy. The pair have a daughter named Ashley.

The potential series, about a standup comic raising a family in the Midwest, will be co-written by Justin Halpern and Patrick Shumacker (Surviving Jack) and executive-produced by Bill Lawrence (Scrubs) and Jeff Ingold (Ground Floor).

Swisher can next be seen in ABC’s upcoming period drama The Astronaut Wives Club, in which she’ll play Betty, the spouse of a NASA astronaut during the 1960s space race. Her other TV credits include The Mindy Project, Royal Pains, Better With You and Gossip Girl.