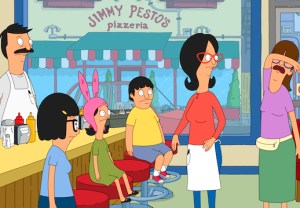 Aunt Gayle is heartbroken in this exclusive clip from Sunday’s Bob’s Burgers (Fox, 7:30/6:30c), but it’s nothing that the star of Quantum Leap can’t fix.

Allow us to explain.

When Aunt Gayle (voiced by Will & Grace‘s Megan Mullally) is stood up by a potential suitor, she’s left with an extra seat for Yarnival — “It’s like Cirque du Soleil, but with cats,” she explains.

Each of the Belcher kids volunteers to take the second ticket, but their reasons for helping their lovelorn aunt aren’t as altruistic as you’d think. And when Linda states that an essay contest shall decide the winner, Gayle suggests that the topic include romance and the NCIS: New Orleans actor.

Press PLAY on the video below for a sneak peek, then hit the comments with an epic poem about Dean Stockwell, perhaps?