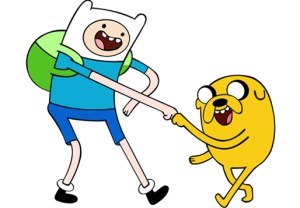 Hold onto your lumps, fellow humans, because Cartoon Network’s Adventure Time is heading to the big screen.

The Emmy Award-winning series — which follows the Finn the Human and his magical dog Jake as they fight to save the mysterious Land of Ooo — is being developed into a feature film, our sister site Deadline reports.

Originally created as a short for Nicktoons’ Random! Cartoons in 2009, Adventure Time premiered as a full-fledged series on Cartoon Network in 2010 and has since aired more than 180 episodes.

Adventure Time fans, start pitching your ideas for the movie: Who should it focus on? What pivotal Adventure-related topics should it explore? Drop all your thoughts in the comments section below.