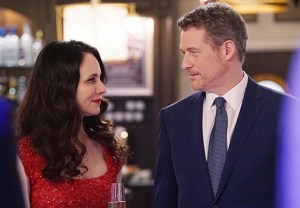 Much like those beloved sheepherders of Brokeback Mountain, it seems Revenge‘s Victoria and David just can’t quit each other.

When we last left the tempestuous exes, they had agreed to go their separate ways — including David’s unofficial promise to, you know, stop trying to murder her — but new photos from the ABC drama’s March 15 episode find them side-by-side once again.

Then again, images can be deceiving. Per the episode’s official description, Natalie (flawless newcomer Gina Torres) invites David to be her date to a lavish Fourth of July party — lest we forget, it’s always summer in the Hamptons — in an attempt to “flaunt her new fortune in Victoria’s face.”

I’m pretty sure I can speak for Victoria when I say, “Challenge accepted.”

Browse the new Revenge photos below, then drop a comment: How do you hope the final episodes of Season 4 play out?