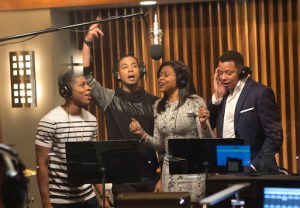 In the near future, Fox’s Empire might expand to a concert venue near you.

The network is “certainly thinking” about sending Lucious Lyon’s artists out on tour, EW.com reports.

Dana Walden, co-chair and co-CEO of Fox Television Group, tells the site that a live musical tour — much like the one the network did with Glee for two summers — is a definite possibility for the ratings juggernaut.

“There’s no reason not to think of having all sorts of ancillary opportunities with this show,” Walden says.

(Note to Fox re: those “ancillary opportunities”: Cookie Lyon’s Prison-Yard Workout: Six Weeks to a Flashable Behind. Think about it.)

Would you buy tickets to an Empire concert? Let us know in the comments!