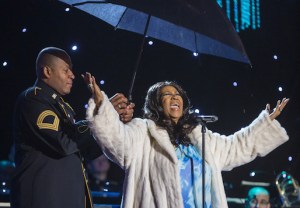 American Idol‘s current crop of contestants had better learn the meaning of R-E-S-P-E-C-T — or else prepare to get read like 10-cent paperbacks at a rainy-day yard sale.

TVLine has learned that Aretha Franklin will mentor Season 14’s Top 16 as they prepare for a pair of Motown-themed episodes — to be filmed for the second consecutive week at The Filmore in Detroit and airing next Wednesday and Thursday (8/7c on Fox).

The Queen of Soul will also perform on the Idol stage for the first time since appearing via satellite during the Season 12 finale.

Idol kicked off the Season 14 voting rounds this week — with the Top 12 guys airing Wednesday, and the Top 12 women airing tonight.

Next week, Ryan Seacrest will announce the eight singers of each gender who will remain in the competition based on America’s votes. That number will be winnowed down to a Top 12 who will be revealed on a live telecast on Wednesday, March 11.

Excited about Aretha imparting her wisdom (and shade) on the next generation of Daughtrys and J.Huds? Hit the comments with your thoughts!
https://www.youtube.com/watch?v=jk-PUIA6aBw