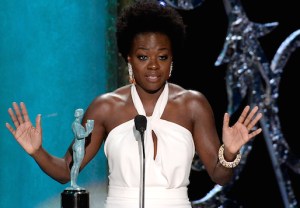 There shall be no Sunday Funday for the Screen Actors Guild Awards in 2016.

Originally scheduled to air Sunday, Jan. 31, the ceremony has now been moved up to Saturday, Jan. 30; as with previous years, the SAG Awards will still air simultaneously on TBS and TNT.

This year’s SAG Awards, airing Sunday, Jan. 25, amassed 4 million total viewers across the TNT/TBS simulcast, while the last time the show was held on a Saturday (in 2010), it drew 4.7 million.