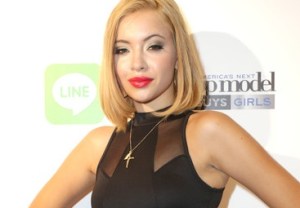 Mirjana Puhar — a contestant on the most recent cycle of America’s Next Top Model — was found dead Tuesday in her boyfriend’s home, TMZ reports.

Puhar, 19, was a victim of an alleged triple homicide in the Charlotte, N.C., house belonging to her boyfriend, Jonathan Alvarado. Alvarado also was killed, along with his roommate, Jusmar Gonzaga-Garcia.

The site also reports that Emmanuel Jesus Rangel, 19, has been charged with three counts of murder in connection with the alleged crime.

Puhar competed on ANTM’s Cycle 21, which aired last summer, before being eliminated in the 10th episode. During her time on the reality competition, she had an on- and off-flirtation with fellow contestant Denzel Wells.

RIP Mirjana 💕 you are one of the craziest and most compassionate girls I have ever met! I am so… https://t.co/w2z7m866JB

Heaven gained THEE MOST beautiful angel of them all. As I cry writing this, I know she's in a better place. RIP SISTER/ QUEEN MIRJANA 👑