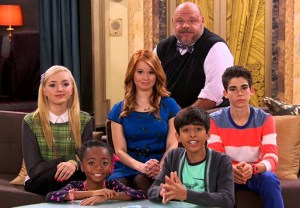 It’s official: After four seasons (and 101 episodes!) of nannying the Ross clan, Disney Channel’s Jessie is packing her bags and hitting the road — but the family’s story is far from over.

The network has given a direct-to-series order to an untitled spinoff starring three of Jessie’s charges, Emma (Peyton List), Ravi (Karan Brar) and Zuri (Skai Jackson). Curiously absent from the new sitcom’s cast are Cameron Boyce, who plays troublemaker Luke Ross, and Kevin Chamberlin, who plays the family’s housekeeper Bertram.

Question for the fans: How do you hope Jessie ends its four-season run? And what’s your take on this continuation series? Drop a comment with all your thoughts below.