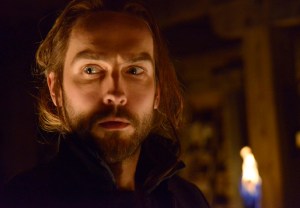 After Monday’s time-warp of a Sleepy Hollow season finale, star Tom Mison has a somewhat startling idea for the direction in which he’d like to take Ichabod, should the bubble series return for a third season.

(Keep in mind, [Spoiler Alert!] Capt. Crane watched his son die in the season’s penultimate hour, then was involved in — though not directly responsible for — his witchy wife’s demise in the finale.)

“I’d like to see him put on a really big grin, have a big smile on his face and carry on, stiff upper lip, keep your chin up, pip pip British, et cetera while underneath, my god, he killed his entire family!,” the actor says, laughing.

He’s joking, kinda. Following our exclusive post mortem chat with Sleepy showrunner Mark Goffman, read on for Mison’s take on the season-ender, Katia Winter and John Noble’s exits (for now, at least) and just what that cell-phone passcode might really mean.

TVLINE | Ichabod kills Katrina, in part to save Abbie. That’s got to be a hard choice.
He wants to stop her and he wants to defend Abbie. It’s just in the tussle, her knife goes into her heart. That’s my story and I’m sticking to it.

TVLINE | I can’t imagine that Ichabod will let himself off the hook for that very easily.
No. That’s why I was keen on it being partly accidental. I think it would be too much of a turn on a sixpence if he suddenly grabbed a knife and stabbed his wife. If he intentionally killed her, no matter what she was doing, I’d find that difficult to believe. I don’t think that would be particularly realistic. So the fact that it was accidental but he was doing the right thing because he had to protect Abbie and [Katrina] had tried to kill him a lot, it’s very delicate. It’s a delicate line to walk… If we go into a third season, of course there’s going to be the guilt. There’s also, I suspect, the fact that Abbie was the one who shot Henry… Abbie killed his son, and then he killed his wife. That could open up lots of doors… or they could best be left shut.

TVLINE | Ichabod could go down a dark path in Season 3. Is that something you’d want to explore with him?
I don’t think he’s the kind to do that, actually. I don’t think he would want anyone to see how much he’s hurting. He would want to get on with it. They made a choice. Henry and Katrina made their decision to turn dark. Abbie and Ichabod made their decision to fight against it, and that’s the decision and we’re going to go with, and I’m going to be strong and we’ve got other battles to fight. This is what I’d like to see: him put a lid on it and let those emotions just bubble underneath. Much like we saw in Season 1 when he was so eager to hide his emotions and then there’d just be outbursts, like when he went completely nuts against the scarecrow root monster. And, I guess, the built-up tension that let him go nuts on Solomon Kent in this season. Little bursts of uncontrollable violence, because he’s trying to keep everything under wraps.

RELATED Where Is Sleepy Hollow‘s Kindred? Tom Mison Has a Marvel-ous Theory

TVLINE | What were Katia Winter and John Noble’s last days on set like — given that they won’t be back, at least not for the foreseeable future?
Oh man, I was so bummed. “For the foreseeable future.” Who knows what’s going to happen? But when it was their last day, for all intents and purposes, that’s it. God, I’m going to miss both of them a lot if we don’t work together again. John is so incredibly classy and such a brilliant actor. What a treat to get to play with him for two years. And Katia, these last few episodes, you give her something really meaty to do, and I think she’s cracking. I think she’s a really great actress, and it’s a shame that it took so long to take her away from the damsel-in-distress trope and give her something juicy. Because she relished it and went with it, and I thought it was very exciting to watch. I’ll miss her, as well. We’ve become very good friends in the past two years.

TVLINE | These episodes seem like a reboot or a re-centering of the series. Is that an accurate assessment?
Yeah, if we do get a third season, it would definitely be a reboot. It certainly felt, after watching [“Awakening”], particularly the last 20 minutes of it, it certainly felt like we’ve acknowledged the show that everyone loved, and we can still do it… If there is no third season, then it certainly feels like ending it on a high and rounding it off nicely.

TVLINE | You say that very casually — “If there is no third season” — but I can’t imagine it’s an easy thing to think about.
No, it’s not. I’m certainly not bored. I think there are still lots of exciting stories to tell. I think rounding off this season with the core group — with me, Nicole [Beharie], Lyndie [Greenwood] and Orlando [Jones] — all together, that’s a pretty exciting foursome to send off and be brilliant. I think there’s lots of potential there. I don’t think I’ll ever get bored of watching Lyndie run around and kick people. [Laughs] Lyndie has been our secret weapon. Jenny is such an amazing character… I hope if there was a third season, that she’d have an awful lot more kicking people. [Laughs] She does more than just kick people. I can’t say “kick ass,” because it doesn’t suit an English accent.

PHOTOS Quotes of the Week: Zingers From Scandal, Jane the Virgin, Sleepy Hollow and More

TVLINE | What was it like to go back and play an Ichabod who has never seen something like a smartphone?
It was nice to approach that in a new way this time. [Abbie] sends him to her iPhone, and he doesn’t believe that something like that can exist. Whereas when he comes forward to the modern day, he knows that everything around him is tangible and it’s there right in front of him. It obviously exists, but my God, it’s weird. Whereas when it’s on his home turf, when you’re bringing this weird little iPhone, this weird thing that he’s never seen before, and you’re taking that into his manner, he’s not going to believe it’s anything other than, well, witchcraft, probably.

TVLINE | Her passcode is his birthday.
‘Shippers of the world, unite. [Laughs]

TVLINE | All I’m saying is, there’s only one other person whose birthday was ever my password to anything, and —
— is that your husband? Right. Right. Well, finally, finally it’s Abbie who can be accused of ‘shipping and not just me!

TVLINE | That’s because, in interviews, Nicole Beharie isn’t saying in things like, “They’re drawn to each other.”
But it’s true, isn’t it? And Nicole, you only need to look at her, she thinks it. Of course she does. [Laughs] She’s just better at this than I am.