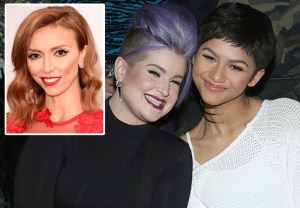 First, a quick recap: During Fashion Police‘s post-Oscars special on Monday, co-host Giuliana Rancic made a (terrible) joke about Zendaya’s dreadlocks, one that insinuated the K.C. Undercover star’s hair smelled like marijuana. Zendaya, feeling that the joke also had racist connotations, posted an open letter on her Instagram account, urging anyone with such comments to “contemplate a little before opening your mouth” in the future.

Rancic tweeted a response to Zendaya’s well-executed (and well-deserved) drag, apologizing to the actress and claiming the joke wasn’t intended to be racist.

Now, Osbourne is adding her voice to the conversation — and it appears she’s got a lot to say:

I WILL NOT BE DRAGED INTO THIS! The situation is being rectified like ADULTS by both parties. I hope you can leave it to them & do the same!

you guys do realize that @Zendaya is my friend right?

Im giving everyone involved 24 hours to make it right or the world will hear how I really feel. contactually Im not allowed to speak!

I DID NOT MAKE THE WEED COMENT. I DO NOT CONDONE RACISM SO AS A RSULT OF THIS IM SEREIOULSY QUESTIONONIG STAYING ON THE SHOW!

UPDATE: Rancic appeared on Tuesday’s edition of E! News to further apologize to Zendaya, acknowledging that “something” she said during the Oscars special “did cross the line.” Watch her full apology video here.

What’s your take on this whole debacle? What do you think Osbourne is hiding? Should we take this as a sign that Fashion Police should have ended after Joan Rivers’ death? Drop a comment with your thoughts below.