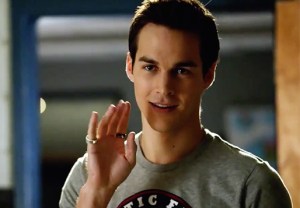 Wood, who currently recurs on The Vampire Diaries as magical sociopath Kai Parker, has been cast in showrunner Plec’s new CW drama pilot Cordon, which follows a group of unlikely heroes who emerge amidst a deadly outbreak in Atlanta, our sister site Variety reports. Wood will play bad guy-turned-cop Jake.

In addition to The Vampire Diaries, Wood’s TV credits include roles in Major Crimes, Girls and The Carrie Diaries.

* Following a nasty exchange with students from Penn State University, ESPN anchor Keith Olbermann has been suspended for the rest of the week, according to The Wrap. The online confrontation began when Olbermann referred to students’ efforts to raise money for cancer research as “pitiful.”

* ITV’s Broadchurch — the inspiration for Fox’s cancelled Gracepoint — has been renewed for a third season, with stars David Tennant and Olivia Coleman slated to return.

* Originally slated for an April 10 premiere, The CW’s new Friday night lineup will now begin April 17 with Cedric’s Barber Battle at 8/7c, followed by Whose Line Is it Anyway? at 8:30/7:30c and supernatural drama The Messengers at 9/8c.