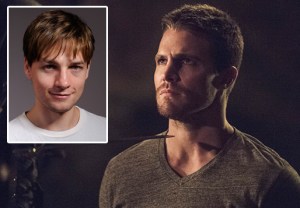 For his Arrow directing debut (airing Wednesday at 8/7c on The CW), Everwood alum/Rookie Blue star Gregory Smith was handed no ordinary episode.

The hour features not only the return of Ra’s al Ghul and the unveiling of Ray Palmer’s A.T.O.M. suit, but also “a final twist” that executive producer Marc Guggenheim predicts fans will be “talking about for a long time.”

So how did Smith react upon learning that he would be helming the pivotal installment?

“When I read [the script], I was incredibly excited, but also, I was like, ‘Uh oh,'” the actor tells TVLine. “There was a bit of a nervous moment when I realized they were trusting me with something very, very special. And I’m so glad they did. The pressure was on!”

Read on as Smith talks reuniting with several good friends at Arrow, shooting his favorite scene and coming to terms with Rookie Blue‘s inevitable end.

TVLINE | How did this directing gig come about? Did you approach them, or did they come to you?
[Executive producer] Greg Berlanti and I worked together on Everwood many moons ago, and that was really where my interest in directing took hold. About a year-and-a-half ago maybe, I saw Greg and told him about the episodes I’ve been [directing] of Rookie Blue and Saving Hope, and he said that he believed in me and he thought I was ready to do an episode of Arrow. So he took a big chance on me. It was nice [how] it came full-circle with the beginning of my career and everything that I wanted to do. Being able to do that with Greg all these years later was really cool.

TVLINE | How familiar were you with the show and its mythology beforehand?
Over a couple weeks, I just binge-watched it. It was amazing to see how the show and the characters evolved. So I felt like I knew everything about everyone and every little moment. I can’t imagine having [directed] the show without doing that. It was a lot of fun, and I became such a huge fan of the show watching it, so then it was pretty much a dream come true to be able to step right in and work on it.

TVLINE | Having become a fan, what excited you most about this particular episode, storywise?
There’s a lot of things. There’s a lot of really big, crazy fun action sequences, and I was always so impressed, watching the show, [by] the complexity and the scale of the sequences that they shot… And then, one of my oldest friends in the world is Brandon Routh [who plays Ray Palmer]. We’ve known each other now for, it’s gotta be 15 years or something, but we’ve never been on a set together. So the days that I was working with him, I had to pinch myself every half-hour to know that this was really happening… Also, I knew Stephen [Amell] because we played best friends in a movie [called Closing the Ring] years ago. So it was very cool to come full circle and work with all these friends I made years prior in a different way.

TVLINE | You’re no stranger to intense action — the Rookie Blue episode you directed, “Under Fire,” elevated my pulse quite a bit — but Arrow is on a whole different level, and Stephen told us this episode is quite stunt-heavy. How did you tackle that?
The crew that they have up in Vancouver, the stunt crew and the camera crew and the A.D.s, it’s incredible how good they are and what they’re able to pull off. I had a huge support network and people that I could really, really trust and listen to in order to pull the sequences off. But at the end of the day, it’s really storytelling. You talk to the writer and you try to really understand the intention and the beats and the story that you want to tell. An action sequence, at the end of the day, isn’t that different — for me at least — than a drama sequence. It’s just the tools that are in your quiver are different. 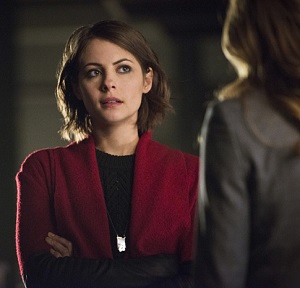 TVLINE | What was your favorite scene to direct?
There’s a few. There’s a scene towards the end of the show with Thea. I can’t really say much else… There’s a sequence that we shot on a helicopter pad that was a lot of fun. Every day, there was a couple scenes that I was really excited to shoot. It was a hard to pick a favorite.

TVLINE | In the photos from this episode, everybody looks like they’re in dire straits. Which character would you say has the roughest journey?
[Laughs] That’s a tough one. I don’t know if I can answer that. I think it’s pretty equal opportunity, in terms of there’s a few people who really have a tough time.

TVLINE | You’ve done quite a bit of directing while balancing Rookie Blue. Is next season the last one of Rookie Blue? And if it is, do you see yourself doing more behind-the-scenes work rather than 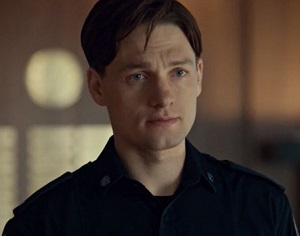 in front of the camera going forward?
We’re not sure right now if it’s the last season or not. We’re waiting to hear. But eventually, it will end, and I’m going to have to make some big decisions about the direction I want to go with my life. Selfishly, I would love to continue to be able to do both — not necessarily at the same time. I would love to keep acting here and there and directing. I think they both inform one another in a really unique way. At the end of the day, it’s not really up to me. My attitude is, I’ll see what the universe wants me to do and just try to do the best job I can at it.