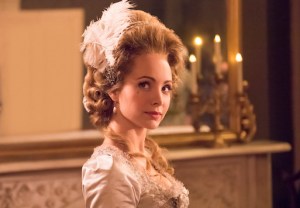 The Revolution will continue to be televised, starting April 13, when AMC’s TURN: Washington’s Spies opens Season 2.

The period espionage drama — which in the off-season added Lost Girl‘s Ksenia Solo (pictured) and The Mentalist‘s Owain Yeoman as Peggy Shippen and Benedict Arnold, respectively — will kick off its run that Monday at 9/8c with a two-hour premiere, before settling into its regular 10 pm time slot the following week.

Season 2 of TURN, reads the network’s press release, “moves deeper into the battles waged by soldiers and civilians alike in the pursuit of freedom, and the sacrifices they’re willing to make to secure it. As Abe becomes more committed to the Culper Ring activities, George Washington battles both personal demons and betrayal from within his ranks that threaten not only his leadership but the fate of the revolution. As the colonies struggle to become a nation, the outcome of the revolution will hinge on alliances both on and off the battlefield.”