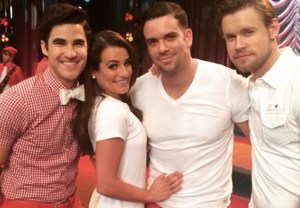 While you watched Brittany, Santana and [Spoilers, kind of] walk down the aisle on Friday’s Glee, the cast was busy getting emotional about wrapping the series — and if you thought the wedding’s guest list was extensive, just wait ’til you see who’s returning for the last hurrah.

On the eve of her final day on set, Lea Michele shared a group photo of everyone fans can expect to see in the coming weeks. Ready? Let’s do this.

For starters, all of the original New Directioners are back in the final four episodes, including Dianna Agron — who was unable to attend Friday’s wedding episode due to scheduling conflicts — and Dijon Talton, who played the gone-but-apparently-not-forgotten Matt Rutherford in Season 1. (Remember him?!)

The former newbies are also back in action, including Jake (Jacob Artist) and Ryder (Blake Jenner). And is that Will’s ex-wife (Jessalyn Gilsig) we see standing next to Emma (Jayma Mays) in the back row? Talk about awkward.

Browse our gallery of behind-the-scenes photos from Glee‘s final run below, then drop a comment: How do you hope it all ends?