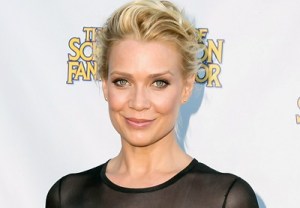 The actress will co-star in the potential Chicago Fire spinoff, which will be introduced this season as an hour of the mothership series.

Per our sister site Deadline, Holden will appear in Episode 19 of Fire as Dr. Hannah Tramble, a fearless, brilliant ER surgeon whose tough as nails childhood has given her a dark edge. She joins the previously cast S. Epatha Merkerson (Law & Order) as the head of the hospital, Yaya DaCosta (Ugly Betty) as a nurse and high school acquaintance of firefighter Kelly Severide and Nick Gehlfuss (Shameless) as a doctor and the brother of Chicago P.D.‘s Jay Halstead.

Prior to being killed off The Walking Dead, Holden appeared on The Shield and The X-Files. Most recently, she guest-starred on Major Crimes and was attached to its spinoff S.O.B., starring Jon Tenney, which has been in limbo during TNT’s management transition.