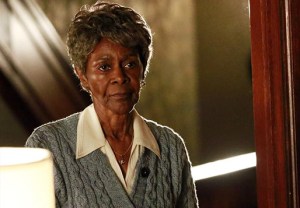 “Don’t you know a VIP when you see one?”

If you take nothing else away from the heaping platter of crazy that was this week’s How to Get Away With Murder — an hour that included the discovery of the previous (and badly damaged) occupant of Wes’ apartment; some hot parking-lot sex; a genuine, first-time “I love you”; and an Annalise-Nate face-off that confirmed only Pete Nowalk & Co. know exactly what TV’s hottest/creepiest lovers are planning — let it be Cicley Tyson’s exquisite, nine-word introduction to Ophelia Hartness (AKA Annalise Keating’s mother).

“Your boss came out of my V and her daddy’s P, so show a little respect for her mama,” replies Ophelia, a woman whose casual, sometimes disdainful crudeness doesn’t just hint at her hardscrabble origins, but also raises a middle finger at the upper-class trappings that have put so much distance between herself and her wealthy defense-attorney daughter.

But that acronym — Very. Important. Person. — works on so many levels in “Mama’s Here Now.”

Certainly, Ophelia is of utmost importance in Annalise’s life — not only because of the DNA that binds them, but because she’s one of the few folks who knows the ugly origin story of this legal superhero. Ophelia is also important from a plot standpoint, too, as her presence fills in so many of the missing puzzle pieces in Sam and Annalise’s romance, in Annalise’s protective maternal instincts, and in our protagonist’s relentless drive to win at any cost.

Most of all, though, it’s guest star Tyson who connects the V to the I to the P. In a handful of scenes, the octogenarian actress and Viola Davis transcend the boundaries of television and turn our couches into front-row seats for what feels like live, electrifying theater (simultaneously gripping 12 million folks).

Act One: A Bedroom
Ophelia bursts onto the scene, pays no mind to her daughter’s guilt-ridden, bed-bound state, and throws open the blinds. This is a scene in which nothing is spoken overtly — it’s all surface talk and barbs hinting at deeper wounds, but the light has been released, and it’s reaching into the dark corners of this house of secrets. There’s a quarrel over something as established Annalise’s name — turns out that was a moniker she gave to her reinvented self — while “Anna Mae” is just “something else your mama gave you from the poor box.” But Ophelia’s no simpleton: Later, when she finds Wes sitting at the edge of Annalise’s bed, she acknowledges the inherent sexuality pulsing through this April-October interaction. When Annalise flinches, Ophelia’s response — “Somebody’s always the student, somebody’s always the teacher — that’s how sex works best” — lands painfully, and we know the older woman’s very specific choice of words will come back to haunt her.

Act Two: A Kitchen
Annalise finally makes it downstairs despite grief over her husband’s passing and the unjust arrest of her boyfriend, then grabs a chicken leg and a bottle of vodka. “You didn’t used to drink,” notes Ophelia. “Annalise drinks,” growls her daughter, indicating there’s a woman in the room Ophelia hasn’t even met. Somehow the talk turns to the firm’s rape case — a female nurse is the accused — and Annalise’s mom posits that sexual crimes are a man’s territory: They’re the takers, women are the givers. “What have I ever nurtured? What have I ever protected, cared for or loved? What have you?” Annalise asks calmly. But when Ophelia glosses over the subtext, we finally see the frenzy in Annalise’s eyes. “DID YOU KNOW?” she demands — and we’re taken back to last week deeply uncomfortable moment when Annalise’s client insisted Annalise didn’t know what it was like to be raped. Ophelia’s next four words — “Uncle Clyde is dead” — become equal parts confession and consolation, and it drives Annalise (who’s clearly known the answer for decades) to smash a glass against the wall. “[Sam] said this thing that happened to me, what you ignore, is why I am the way I am!” Annalise yells.

At this point, it should be impossible to see Ophelia’s side of the story — but Tyson’s ensuing monologue, in which Ophelia recounts the history of her sister’s elementary-school rape, and her own early horrors at the hands of men — makes palpable the cycle of victimhood that’s fundamentally warped her belief system. “[Men] have been taking things from women since the beginning of time. There’s no reason to talk about it, and get all messy everywhere… You ain’t learned nothing,” Ophelia huffs.

“Oh,” says Annalise. “I learned ‘Anna Mae’ belonged in a hand-me-down box.” She strides back up the staircase, leaving her mother in almost the same exact spot where Sam’s corpse was splayed just a month prior. (Nice new rug, BTW — looks like something Frank might’ve picked out!)

Act Three: The Bedroom Again
It’s easy to want Annalise to be infallible — the hard-charging protagonist who never has a moment of doubt or weakness — but this isn’t the Justice League. Teaching “How to Get Away With Murder” is different from living it, and so it’s not that surprising when she plunks down on the floor and lets her mother sit on her bed and comb her hair before she leaves town the next morning. Ophelia, though, freed from direct eye contact by their positioning, begins to tell a story of the house Annalise had grown up in (“it wasn’t much, but it was mine”), how she’d taken in Uncle Clyde when he fell on hard times (that’s what family does), and how she’d seen the chronic drunk exiting Annalise’s bedroom. With barely a change in tone — as if she’s reading a story book to a little girl — Ophelia recounts how Clyde’s penchant for falling asleep on the couch with a cigarette created an opportunity. She took her kids to her sister’s home, and “That night, that house that I loved so much burned burnt to the ground — and your Uncle Clyde burned right with it.”

The moral of the story is something out of Dolores Claiborne (which, for the uninitiated, is not for toddlers): “Sometimes, you gotta do what you gotta do — even if all you got is a long match and a very flammable hooch.” In other words, Ophelia knows her little Anna Mae has probably done some bad things, but it’s OK — because there was probably good reason.

I know we’ve got two more episodes left of Season 1 — back to back next Thursday starting at 9/8c — but somehow, I felt like this was the part where the curtain should’ve closed, and Tyson and Davis should’ve come out and done their curtain calls once, twice, ten times maybe as the crowd remained on its feet, rapturously applauding.

(This is what we all did using our DVR pause buttons tonight, yes?) On any other series, that might be enough of a recap, but OTHER THINGS HAPPENED, so let’s examine… 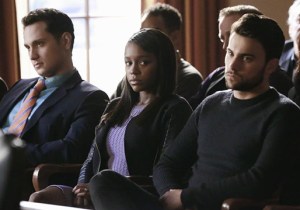 ORANGE IS THE NEW COLOR PALETTE (FOR NATE) | A gratuitous strip-search/hose-down scene in jail proves Nate is in serious trouble (and that Billy Brown’s torso > everyone’s). And Michaela, for one, isn’t resting easy knowing an innocent black man is taking the fall for Sam’s murder. She easily slips into the role of a court stenographer named Tami and scores prosecutorial intel about Rebecca’s interview with the police (more on that in a moment), but when Annalise regains (legal) consciousness and sees Michaela at the courthouse, she sends her minion away. After his preliminary hearing, Annalise visits Nate — but their entire interaction (he huffs about her lack of genuine grief; she thanks him because “That bastard deserved the grave”) seems like it’s staged for the surveillance cameras. As she exits, she slips Nate a paper with a suggestion that he fire his lawyer — and with the number for new representation. Do I sense a fabulous Season 2 guest spot in the making?

CLAW & ORDER | The cops call Rebecca — knowing she’d spoken on the phone with Nate — and while Wes instructs her to tell nothing aside from facts, she volunteers that Nate asked her to plant evidence at Sam’s (not quite what we saw pre-Murder Night). Thanks to Michaela’s inside intel, Wes determines Rebecca wouldn’t exactly win the polygraph portion of the Miss Shifty Ex-Con Pageant, so he looks more into the whereabouts of Rudy Walters (aka the previous tenant of his apartment who left claw marks on the wall). Laurel goes to the mental hospital incognito as Rudy’s estranged sister (with Wes playing the role of her hubby) and they find a guy barely able to speak, move or make eye contact. When they show him a pic of Rebecca, all he can utter is the word “wet” — though whether there’s any credence in Wes’ theory that this is related to the water tank where Lila’s body was found seems like a stretch at best. (BTW, I know this was the week’s Big Reveal, but somehow compared to Annalise-Mama, if felt kinda small.)

Oh, and whaddaya know, Rebecca is tracking Wes’ cell phone — so his “I was at the library” jig is up. She knows he’s been to Enfield Behavioral Hospital — and he’s gonna have some ‘splainin to do! 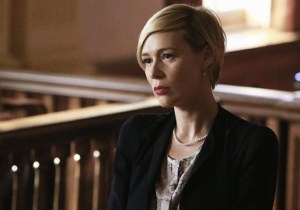 BONNIE SCORES (TWICE!) | After a rocky start to the firm’s rape defense case — “find her guilty,” stutters Bonnie, before adding, “that was a slip” — Lurky McChurchmouse exposes medical lawsuit fraud (and a sexy relationship) between her client’s accuser and the attorney for the hopsital where said client worked. It barely matters, though: All we need to know is the victory results in Bonnie and Asher relighting the candle wick (so to speak) — where Frank eyes ’em in the rear view. (Ewwww… here’s hoping he averted his eyes and played Scrabble on his iPhone instead!)

This week’s other two developments: Bonnie drinks from Annalise’s vodka bottle and tells Frank (in so many words) that she knows about Murder Night; and a very drunk Oliver says “I love you” to a very sober Connor.

On that note, I pass the mic to you. What did you think of this week’s HTGAWM? Sound off below!