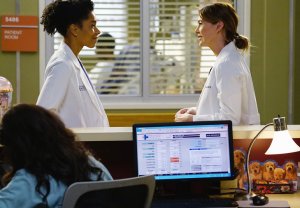 Apparently, a funny thing happened on Mer’s way to D.C. to have “emergency sex” with Derek, because neither did she make it, nor did they, er, make it. And in this week’s Grey’s Anatomy, Maggie — having spent the weekend fielding frantic calls from her brother-in-law — wanted to know WTH. So, um, WTH? Read on, and you can decide for yourself whether Mer is “The Great Pretender” who gave this installment its title.

HE AIN’T HEAVILY SEDATED, HE’S MY BROTHER | As the episode began, Bailey, Ben and his sibling, Kurt, were spreading the guys’ father’s ashes in the woods when Kurt collapsed complaining of shortness of breath. After some testing at Grey Sloan, Mer discovered that his estrogen levels were as high as a cheerleader’s and his spleen was so swollen, it had to be removed, stat. Ben couldn’t figure out what was going on — drugs, he feared — but, based on the test results and the patient’s hairless chest, Bailey surmised that his brother was becoming his sister. “I’m just supposed to be okay with this?” Ben yelled at Kurt. Yes, Bailey told her husband —  emphatically — when they were alone. “This isn’t about you. It’s her song, so get off the stage and let her sing it.” Ben never did come around, but as the episode came to a close, Bailey recruited Jackson to treat Kurt… that is, Rosalyn.

LET SLEEPY DOCS LIE | While Alex and Callie playfully asked an “exhausted” Mer about her long-distance booty call, Maggie’s questions were more pointed. When finally she got tired of being dodged and fed lies, she admitted that Derek had phoned — repeatedly — wondering where Mer was. So “whatever you were doing” with a suitcase full of lingerie, Maggie said, “it wasn’t with him.” She wasn’t judging, she added. And no matter what, “I wanna be here for you, but I like Derek, and I hate lying.” (She did manage to cover for her half sister, however, coming up with stories about naps and showers and emergency surgeries.) Still, Mer wouldn’t come clean. “I trust my baby sitter with my kids,” too, she noted. “That doesn’t mean I owe her my life story.” (Ouch, Mer. Ouch.) In the end, Mer confessed that she never got on the plane. Instead, “I drove to one of those hotels by the airport.” Afterward, she was too embarrassed to admit to anyone that she hadn’t gone to visit Derek. “I totally understand why you didn’t tell me. I’m sorry,” said Maggie, embracing Mer. “But thank you for telling me.” That evening, Mer also confessed to Alex. “I don’t want to leave [Derek],” she made it clear, “but I definitely do not want to be with him right now.”

HOW EVERYONE GOT THEIR GROOVE BACK | Early on in the episode, Callie — lamenting her recent stretch of celibacy — asked Owen what he used as a pick-up line. As the music swelled, he replied that he was just honest, about his career, his time in the military, everything. Later, he scolded Herman for stealing a couch, and in response, she invited him to — nudge, nudge, wink, wink — try it out with her. Kidding, she added too late to keep him from blushing. When he reported her behavior to Amelia — in case it was symptomatic of Herman’s tumor worsening — Shepherd asked if it was a no-no for colleagues to, you know, try out couches together. This set Owen off stammering yet again. Meanwhile, treating a woman who faked a fainting spell to avoid turning down her clingy suitor’s proposal, Amelia admitted to Callie that she had no game whatsoever since she got off drugs. Mind you, “I am in no way endorsing narcotics as a dating aid,” she hastened to add. That night, though, Amelia showed up on Owen’s doorstep with a bottle of sparkling lime water and left having received a whopper of a kiss. At the same time, Callie was asking a hot guy to dance with her at the docs’ favorite bar.

SEX SELLS | When she overheard that Arizona lived at Alex’s in essentially a Residents Gone Wild video, Herman laughed her ass off. Alex then made matters more embarrassing by revealing to Herman that last year, Arizona got “handsy” with a resident. But the more uncomfortable Arizona became, the more Herman loved it. “This is the best day,” she chuckled. By the time she learned that Arizona had technically been married during her fling with Leah, Herman and Robbins appeared to be well on their way to becoming friends. “You’re a dirty, dirty girl,” Herman marveled. At the hour’s close, the two were even trading stories about their pasts on the purloined couch… which, it turned out, was going to be Herman’s home until either she died or Amelia cured her. If you’re staying here, Arizona said, so am I. To which Herman drolly replied, “You should know I’m not gonna have sex with you.”

SMOOTH OPERATOR | Richard was only too delighted about his reunion with Catherine… until he began to suspect that she was at least partly using him as an excuse to hang around longer and check on Jackson and April (against her son’s wishes). Turned out, Richard and Catherine weren’t quite as reunited as Webber thought. When he called her out for using him, she noted that he seemed to like the idea of a strong woman more than he actually liked a strong woman. “You’re gonna have to figure that out,” she added, “before we move on anywhere.”

OK, your turn. What did you think of the episode? Didn’t you think it was wrong of Mer to put Maggie in the position of having to lie to Derek (without even warning her that she was in that position)? Did you see the Bruce Jenner plot twist coming? Hit the comments!