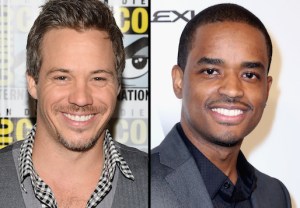 Once Upon a Time‘s Michael Raymond-James and Rescue Me alum Larenz Tate have boarded the NBC drama pilot Game of Silence.

The project — adapted from a Turkish series by David Hudgins (Parenthood) — centers on Jackson (Revolution‘s David Lyons), a rising attorney on the brink of success who could lose his perfectly crafted life when his long-lost childhood friends threaten to expose a dark secret from their violent past.

Per our sister site Deadline, Raymond-James and Tate will play Gil and Tony, two of the aforementioned pesky pals from the past.

Raymond-James’ previous TV credits also include Terriers and History’s recent Sons of Liberty mini, while Tate has had runs on House of Lies and Rush.