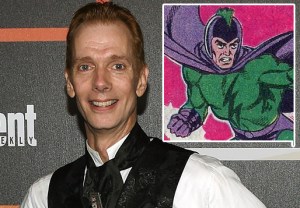 Starling City is finally getting a villainous metahuman of its very own.

Doug Jones, whose TV credits include roles in Falling Skies and Teen Wolf, has been cast as Jake Simmons (aka Deathbolt), marking the first instance of a super-powered character — aside from Barry Allen, of course — in Oliver Queen’s hometown.

Deathbolt, a villain with the power to manipulate lightning, will first appear in Episode 19 of Season 3.

* Telenovela star Cristian de la Fuente has boarded Lifetime’s Devious Maids as a series regular in Season 3, according to The Hollywood Reporter. (Could he be playing Rosie’s not-dead husband Ernesto?)