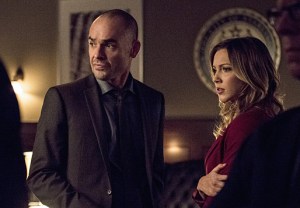 Has the truth set Arrow‘s Laurel free, or found her veritably disowned by her devastated dad?

In tonight’s episode (The CW, 8/7c), we will lay witness to the fallout of Quentin Lance processing Laurel’s multiple lies and sins of omission, including the truth about Sara’s (latest) death and the identity of Starling City’s new Canary.

Paul Blackthorne shared with TVLine a preview of how the family patriarch weathers this emotional blow, and what it might mean for Team Arrow’s heretofore friendly alliance with the SCPD.

TVLINE | I know that a chunk of this week’s episode is set in flashback, as Oliver sneaks back into Starling City. Where is Quentin at at this time?
Well, he’s got a nice head of hair, for a start. [Chuckles] I might just start wearing that [wig] when I go out to dinner. And of course paralleling what’s happening in the present day, in the flashback scenes Lance is dealing with Sara’s death, from the first time around. It was a bit of a disaster how he dealt with it before, with the 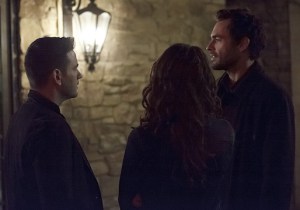 drinking and the breakdown of his marriage and his family and his personal life, so hopefully he’s going to handle it a little better the second time around. But yeah, this is going back to a dreadful time in Laurel and Lance’s relationship. It’s an even worse thing when you’ve lost somebody but you can’t confirm it. How much closure do you put on it, how much hope do you still have? It’s just awful. And yet all good fun — Angry Lance is back!

TVLINE | That first time round, Laurel and Lance were not there for each other, right?
As you see in the flashbacks — and we talked about this a lot when we had the scenes before with Alex Kingston (as Dinah) — it’s a very difficult situation where you’re dealing with grief, where people want to be there for each other but it’s obviously so difficult because you’re going through so much yourself. Plus as I said, there’s that particularly awful aspect of not being a definitive death. How much of an optimism do you maintain?

TVLINE | Meanwhile in the present day, how is Lance taking the news of Sara truly and sincerely dying?
Obviously it’s going to have a huge effect on his relationship with Laurel, because she lied about it for so long. The trust issues are now huge between the two of them. The relationship is going to change enormously, and there will be repercussions of that. He almost feels like she is against him now. And as other events take place in Starling City, that will put even more strain on their relationship.

TVLINE | What does he think of her point of view, on why she lied?
Well, you know — Lance isn’t buying that. Why couldn’t she tell him three months ago? It’s not a good enough reason, as far as he is concerned. There’s the fact that he wasn’t given a chance to A) perhaps seek the killer at that time, and B), most tragically in Lance’s mind, he didn’t get a chance to lay his daughter to rest. He thought he did before, in a pseudo fashion. But this time, when she is dead, Laurel has buried the body before Lance got a chance to see her. I always felt like that was one of the most heartbreaking things, so I believe we will see him at the gravesite trying to get his head around that idea.

TVLINE | Does the fact that Dinah knew about Sara’s death come up?
There’s an interesting moment in the episode where that comes up, yes — much to the disgust of Lance. It gives him even more reason to feel aggrieved.

TVLINE | Just to clarify, Lance knows for sure that Laurel is the Canary? Or has that topic been tabled?
No, he knows that she’s the Canary. And really, he’s disgusted with that idea, that Laurel thinks that she can step into Sara’s shoes. She’s a lawyer, she always had her head in the books growing up…. And here she is trying to emulate Sara? Lance is like, “Look, Laurel, I’ve lost one daughter down that route. Please, don’t continue. I want to keep you alive.” And the fact that she would do that behind his back… Aahh!

TVLINE | Might this be the beginning of end of Lance’s love affair with the vigilantes?
Well, [Arrow] of course is the other person who didn’t tell Lance that Sara is dead, so yeah, their next meeting is going to be “interesting.” Lance isn’t going to be too happy with him, either! His trust in the Arrow is going to be pretty much shelved.

TVLINE | Lastly, do you feel any sort of job security being — for lack of a better term — the show’s lone remaining “wise elder”? Do you feel pretty safe?
No! I don’t take anything for granted. If people don’t die every so often, there’s no reason for people to think that people could die in these high-stakes situations that arise. So no, one would never consider one self to be secure in any way. So you just enjoy it while it is happening and go with the flow. But it’s just so great being a part of this show — it has such great storylines, great characters, great mythology…. I very much enjoy being part of it, because it’s a lot of fun.