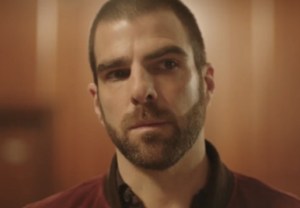 In last week’s miniseries premiere of The Slap, Harry (Zachary Quinto) made it pretty clear that he’s not someone you want to anger.

And on this Thursday’s episode (NBC, 8/7c), he really drives that point home.

TVLine has an exclusive sneak peek at the show’s second installment — told from Harry’s perspective — in which he faces a judge for slapping another couple’s tantrum-throwing child.

RELATED How Did NBC’s Slap Strike You?

Though Harry essentially walks out of the courthouse with a slap on the wrist — no pun intended! — he makes it clear to his cousin, Hector (Peter Sarsgaard), that he’s not going down without a fight.

Press PLAY on the video below for an exclusive sneak peek at the episode, then hit the comments with your thoughts!