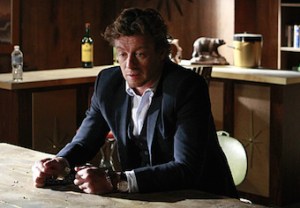 It’s always special when a TV series gets to end on its own terms, and CBS’ The Mentalist will do just that on Wednesday night, with the final two episodes of its seventh, farewell season.

First up at 8/7c, the episode “Brown Shag Carpet” finds Jane returning to the team to help draw out a serial killer fixated on psychics, Then in the series finale, “White Orchids,” Jane and Lisbon are heading for a wedding, though a killer’s quest for revenge threatens to snuff the nuptials.

Here in Part 1 of their TVLine Q&A, series creator Bruno Heller and lead actress Robin Tunney discuss how the final two episodes deliver a “darkness before the dawn,” the “new door” that ultimately opens for Jane and Lisbon and the “duct tape” wish that amazingly came true.

TVLINE | So here we are, talking about The Mentalist‘s series finale…
ROBIN TUNNEY | I think you’re going to be our last Mentalist interview for all time.

TVLINE | Don’t get me started. I’m already bound to get verklempt.
BRUNO HELLER | I might get a pendant with your name on it.
TUNNEY | Memorialize the moment!

TVLINE | You can send me a piece of the old CBI. Bruno, how would you describe the tone for each of these final two episodes? Are they distinct?
HELLER | They’re very much conceived as to play as one and also play separately, because that’s the nature of TV. So, the first episode is not just a setup for the second episode but it sets up problems that are solved in the second episode. We wanted to pay due respect to both what the show has always been, which is a murder mystery drama, and the romantic comedy that has developed over time. It’s light conquering darkness, but you’ve got to start with the darkness to make the light pop. That’s what these two episodes are — as well as very much a “farewell and thank you” to the audience with as much sincerity as possible.

TVLINE | Do we have a nickname for this final serial killer? And is it someone that we’ve perhaps met before?
HELLER | It’s not someone you met before. He’s called Lazarus, and he has a weird obsession with psychics, which obviously plays into the basis of the show. As Robin pointed out to me, I don’t think we’ve done any other serial killers over the years as strongly as this except for Red John, so it’s very much a “full circle” kind of event.

TVLINE | Robin, does it fall on Lisbon to lure Jane back in for this one last job?
TUNNEY | I think he comes back because he realizes Lisbon’s a tremendous piece of ass. [Laughs]
HELLER | I’m going to miss you, Robin. I really am.
TUNNEY | No, he comes back because he wants to. I think he realizes in a way that he needs her. You know, the first [episode] is much darker. There’s darkness before the dawn because the show does end of a very optimistic note. I think most importantly it will satiate the fans who’ve stuck with us through many different time changes, night changes, those who have really grown to love and care about these characters. It gives [Jane and Lisbon] a real future, as a new door opens into a new life for them, and I think that that’s exciting. I think the fans will love it, and that’s what’s important. 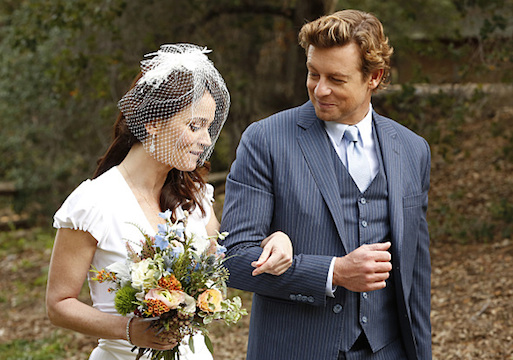 TVLINE | What affected you more, reading the final script or filming it?
TUNNEY | Filming it. You know, this has been the greatest job of my life. I feel like I’ve been so lucky to be surrounded by a group of people that were really talented and also just great human beings, who you couldn’t wait to go to work and talk to and could rely on for advice. Our directing producer, Chris Long, is such an amazing guy. Bruno is, and Simon [Baker]…. It’s also one of those things where the greatest job of your life is also the hardest job of your life, because the timing and the demands are so much… We did 24 episodes for the first five years, and then 22. And this isn’t something that’s a big, sprawling ensemble. We were all there together.

TVLINE | Bruno, when you were working on the pilot seven years ago, what odds would you have placed on these two characters winding up married?
HELLER | Oh, I wouldn’t have even opened a book on it. I mean, it crossed my mind, but no, it was never a thought. It immediately became a thought as soon as you see these people doing their stuff. Lisbon is the kind of “light” in the show, and Jane was kind of consumed in darkness — and suddenly here is a ray of light, a ray of hope that maybe he can do something with his life, that this someone can help him seek out what he wanted. 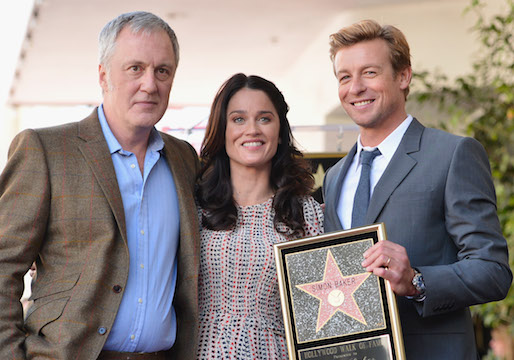 TVLINE | Obviously I have to ask about the wedding, since the pictures already went wide. Robin, was it everything you could hope for from a TV wedding?
HELLER | Didn’t she look fabulous?
TUNNEY | You know, I think the way they carried it off was really unique in that it wasn’t just your traditional TV wedding. I’m just so happy that Teresa Lisbon got a happy ending. I don’t think she’s somebody who ever expected that or ever really wanted it.

TVLINE | And no duct tape.
TUNNEY | No duct tape. I was not duct-taped to a chair. It was this sort of traditional ending for a very nontraditional woman.

Coming up in Part 2 of our Q&A, following the series finale: Heller discusses alternate endings, Tunney ponders her next move and both contemplate The Mentalist‘s legacy.