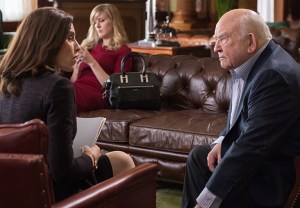 Wait a second… is there a clause in Citizens United preventing campaign donors from getting hands-y?

That might be the thought going through candidate Alicia Florrick’s mind in the following first-look photos from The Good Wife‘s spring return (Sunday, March 1, 9/8c on CBS).

The network’s official description for the hour, titled “Dark Money,” reads as follows: “When Colin Sweeney (Dylan Baker) accuses a television producer of basing an unflattering character and show on his life, Diane and Cary must prove that they are capable of handling his case as Alicia (Julianna Margulies) focuses on the race for State’s Attorney. Also, Alicia competes against Frank Prady (David Hyde Pierce) for a major campaign donation” — from Asner’s Guy Redmayne.

Click through the gallery below for all that good stuff and more — then hit the comments with your thoughts!