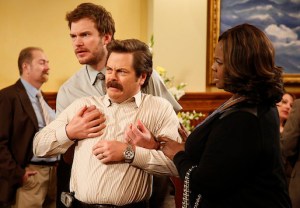 NBC’s Parks and Recreation made one of the show’s long-held dreams come true, in its penultimate episode.

With the top-secret casting of Bill Murray as Mayor Walter Gunderson.

Just days after partaking in Saturday Night Live‘s live 40th anniversary special, the comedy icon popped up on Parks, albeit in a casket, for the funeral of the venerable (?) Pawnee politico.

Murray had long been the dream casting of many a Parks player, including cast members Amy Poehler and Chris Pratt, who each cast their vote for the actor at separate PaleyFest events.

The other twist here is that Parks showrunner Mike Schur said just this past November — albeit before filming on the final season had wrapped — that he didn’t expect to get around to casting the mayor, with Murray or anyone.

What did you think of Murray’s Tuesday Night Not-So-Alive cameo?