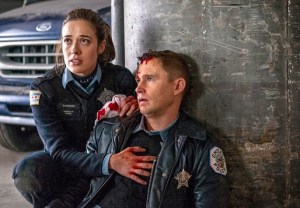 The last time Chicago P.D.‘s Burgess almost died in the line of work, her boyfriend Ruzek dropped the L-word.

With the street cop — and her partner, Roman — getting kidnapped in this Wednesday’s episode (NBC, 10/9c), might her detective beau soon pop the question?

That’s certainly one way the relationship could go, star Marina Squerciati tells TVLine. (The second road is far too upsetting to ponder.) But first, the officers will have to survive a dangerous, “heart-stoppingly frightening” situation in which their “lives are really on the line.”

Read on for Squerciati’s preview.

TVLINE | What kind of trouble do Burgess and Roman get themselves into in this episode?
It’s funny, I think Burgess’ dream and Roman’s dream to get up into Intelligence is the same. They both want the same thing. And then she turns it down when she has the opportunity [to move up]. Everybody can relate to that — you have this idea of what you want and then it’s given to you, and you’re like, “Wait, maybe I don’t want it.” But then how do you deal with that? [When] we start the episode, she realizes that maybe A) she made a mistake, and B) that she’s in a rut. That causes her to make some decisions that put her and Roman into a bit of trouble. What is really fascinating about this episode that Michael Brandt and Derek Haas wrote — when they told me about it, they said, “Watch Reservoir Dogs” — is that neither Roman or I, after we’re kidnapped, have the use of our guns or radios. We have to tap into other police training that we’re not used to to get out of this tricky situation.

TVLINE | How life-and-death do things get for Burgess and Roman? We see in the preview that Roman gets shot…
It is the most on the line that these characters have ever been. What our technical adviser Brian Luce told us is that you don’t ever get rid of your gun. You don’t ever let the perp take your gun, because there’s nothing a perp would love to do more than shoot a cop with his own gun. Just to hear that and hear the things that have happened when a police officer loses a gun, it’s heart-stoppingly frightening. So the moment we lose our guns to these criminals, we realize we’re in a whole different ballgame. Our lives are really on the line.

TVLINE | With everything looking so dire, how does Burgess handle it emotionally? Is she calm and collected? Frantic?
You go through a lot of emotions. We all think we’re a certain person until we’re tested. We all want to think we’re the person who runs into the fire to save the baby; until there’s a fire, you don’t know. We find out who Burgess really is in this episode, if she can handle it and if she’s good enough to get her and her partner out of this situation because Roman’s so devastatingly injured.

TVLINE | First, Burgess got shot, and now Roman’s been shot. Is this a partnership that can survive? It seems like bad luck follows them.
[Laughs] I know! There’s all these Twitter hashtags. This is one of my favorites: #AllianceForASafeBurgessFromNowOn. All these funny ones, like #IsBurgessEverGoingToBeSafe? I love the idea that there’s this cop who isn’t always so slick and can’t always do everything perfectly. She’s human. She’s a good cop, but she also makes mistakes. That’s very relatable — because I always make mistakes.

TVLINE | Where is Ruzek during all of this?
Hopefully, out there trying to find me and help me out! [Laughs] That’s what good boyfriends and backup would do, I hope.

TVLINE | Does he have any idea about what’s happened to Burgess?
He will get an inkling of what’s going on. Intelligence is definitely involved in this kidnapping, but first, they have to figure out I’ve been kidnapped. 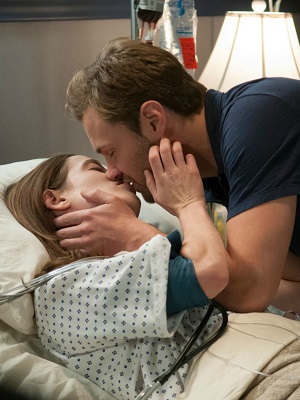 TVLINE | When I talked to executive producer Matt Olmstead recently, he said the heat’s been off Burgess and Ruzek. But that’s bound to change. Are you getting any sense of what the next challenge or step might be for them as a couple?
Actually, last [Wednesday], the reason we couldn’t live-tweet with the fans is because we were filming our first fight scene, which is kind of amazing that we’ve gotten through this shooting and him flirting. We’ve had little tiffs, but nothing serious. Burgess and Ruzek have gotten through it all… really lovingly, which is so nice. [With the fight], we went through our first big thing, and it was great for me and Paddy [John Flueger] as actors to explore a different side of their relationship, as well.

TVLINE | They have had such a happy road so far that I was wondering if there are any hints that a proposal is coming.
I know, right?! I was like, either Matt Olmstead is going to make Ruzek propose or it’s going to go bust in the worst way ever. I feel like something dangerous is coming, and I’m kind of scared. You think having a gun in my face in a warehouse episode would have me scared — and it did — but also I’m nervous about what Olmstead has in store for “Burzek.”

TVLINE | Going back to the Intelligence position, could Burgess still get it? Was it a one-time-only offer?
I don’t know if it’s a one-time thing. I’m as curious as you. Is that it? Is it over? Do I never get Intelligence now? It seems like it’s pretty crowded up there. Burgess is realizing in this coming episode that she made a mistake, so can she go back to Voight, and he’s like, “No backsies?” [Laughs] I have no idea.