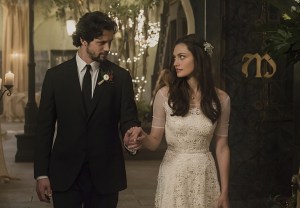 The Originals’ Royal Wedding has finally arrived, but the Mikaelson siblings have understandably mixed feelings about Hayley’s impending marriage to Jackson in tonight’s episode (The CW, 8/7c).

“We know that Elijah thinks this wedding is what’s best for Hayley and her people, but it’s also clear he still has feelings for her,” executive producer Michael Narducci tells TVLine. “As he begins to wonder whether she’s acting of her own will, he may want to talk to her about that — and if he were to speak with Hayley, what would her he say? Seeing Elijah might be more difficult than she can adequately handle. There are a lot of very emotional scenes between those characters.”

Klaus, meanwhile, has given the bride his full blessing, though Narducci admits the groom’s fate is “considerably less than certain” going into the hour. “Klaus sees Jackson as superfluous, so his future is going to depend on what Klaus believes to be the best strategy for his daughter; once he assesses whether Hope will benefit from an alliance with the werewolves, he’ll begin to weigh his options.”

And then there’s Rebekah, who’s “happy” for Hayley, but as Narducci notes, “There’s also a little sadness there. [Rebekah] has wanted to get married and start a family for 1,000 years, but she’s never managed to pull it off. There’s a beautiful, bittersweet connection between those two friends this week.”

Below, Narducci teases more of tonight’s plot points, including scoop on Freya’s agenda, Hope’s budding powers and a potential new threat for Aiden and Josh’s relationship. 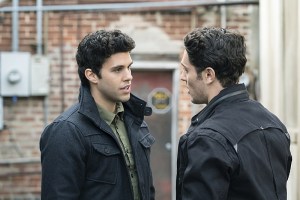 TVLINE | Should we expect any surprise wedding guests?
The wedding itself is one of the most beautiful sequences we’ve shot to date; it’s an incredibly elaborate ceremony. There’s a crowd of werewolves, and interestingly enough, the wedding will affect the vampires as well, and even some of the witches. So in addition to the beauty of this wedding as a backdrop, we get to see how it affects some of our other players. For instance, Josh and Aiden: What’s going to happen to them when the werewolves become even more powerful? Will that make things difficult for Josh, who’s a vampire? Aiden doesn’t want anything bad to happen to his boyfriend. [Editor’s note: Neither do we!] 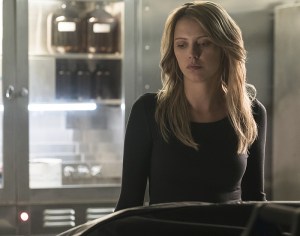 TVLINE | What’s Freya’s ultimate goal now that she’s back?
We’ve played it as a mystery so far, whether or not she can be trusted. She’s looking for an alliance with her family against the threat of this very dangerous witch named Dahlia, who will not only be coming to secure Freya as a slave, but also coming for Hope. Freya will have to ask herself, “Do we really have a common enemy?” And our Mikaelson characters will ask, “Can we trust Freya?” It’s going to be a matter of figuring out who’s being honest with everything they know about this potential threat.

TVLINE | So is Dahlia this season’s big bad? What’s the second half building towards?
This season’s big bad is two-fold: Dahlia is an incredible threat, and she’s coming for the thing that’s most precious to these people, but at the same time, the other enemy is their very nature. Each one of these Mikaelson characters is a little bit distrustful of one another. The thing they’ll need in order to survive this threat is the bond of family, yet the pressure of this terrible enemy will make those bonds very difficult to ascertain.

TVLINE | Elijah appears to be safe, but how is Finn holding up in the aftermath of last week’s explosion?
Kol, Klaus and Rebekah managed to sever Finn’s connection to Mikael and Esther, so when that house blew up, he was at his most vulnerable, which leaves us with a number of questions: Did he wake up in another body? Did he find a way to survive the blast? Is he still a threat to Elijah and the baby? Did he die, never to be seen again? We will answer the questions about Finn’s fate over the course of the episode.

TVLINE | Speaking of that explosion, what can you say about the progression of Hope’s powers?
We wanted to show that she’s unlike anything we’ve ever seen before. Clearly, she can heal herself and has some kind of ability to stop cars, and she must also have some sort of supernatural awareness when she’s in danger. She had an instinctive awareness that, had she and Cami continued on their path, they might have been caught in the blast or caught by Finn. We want to play with the notion of what the baby can do, and how the family is going to react to her. If you have a gifted child, what’s the best way to go about helping them hone their gifts? Klaus isn’t a witch, and neither is Hayley, so if their child has witch-like powers, it’s in their best interest to find someone who can serve as her mentor.

TVLINE | Kol’s been particularly shady as of late. How does he actually feel about Davina, and how will she react when finds out he basically used her?
They have a shared goal in terms of the desire to have a dagger that can put Klaus to sleep if he were to become a threat. Davina has also grown romantically close to Kol; she feels very strongly for him, especially because he put himself on the line in order to rescue Josh, which he did because he didn’t want anything to happen to her. Now, in this episode, we’ll get to see Davina’s gratitude for that assistance, as well as her true concern when she learns everything might not be OK with Kol.

TVLINE | Lastly, we just saw Jeremy leave The Vampire Diaries to become a hunter. Any chance he’ll make a pit stop in New Orleans?
It’s funny you say that, because we talked in the writers’ room about Alaric’s last piece of advice to Jeremy. He should have said, “Go hunt vampires, you’re going to be great — just don’t go anywhere near New Orleans, because there’s a different class of vampire there.” As tough as Jeremy is, and as much as I love and respect Steven R. McQueen, I don’t know that Jeremy and his crossbow would be able to take down Klaus, Elijah and Marcel. I’m hoping Jeremy doesn’t go anywhere near Louisiana.”

Originals fans, do you hope Hayley goes through with the wedding? What are your feelings towards Freya? And which Big Easy resident are you most concerned about moving forward? Browse Hayley’s wedding album below then drop a comment with your thoughts and theories below.