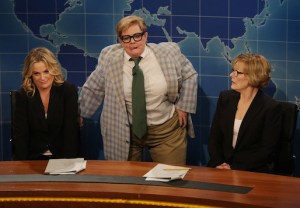 Specifically, Sunday night’s commemorative event drew 23.1 million total viewers from 8 to 11 pm, while drawing a 7.8 demo rating — numbers subject to adjustment once the final half hour gets folded in.

As such, the special currently stands as NBC’s top-rated primetime entertainment telecast (excluding post-Super Bowl programs) in more than eight years (since the Will & Grace series finale), and the most watched in more than 10 years.

Imagine the ratings for the 50th anniversary in 2025 if Eddie Murphy actually comes out and tells a joke?!

CBS | The final two episodes of CSI Season 15 each did 7 mil/1.1, down 16 percent and two tenths from the show’s most recent Sunday outing. A special Undercover Boss opened the Eye’s night with 6.3 mil/0.9.