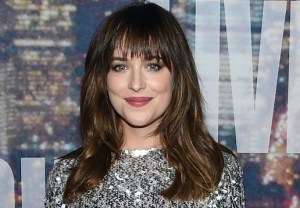 Can she be Fifty Shades of funny?

Dakota Johnson is set to host the next episode of Saturday Night Live, airing Feb. 28, the actress herself announced during an “audience questions” sketch during Sunday’s 40th anniversary special.

Johnson of course is starring opposite Jamie Dornan in Fifty Shades of Grey, which dominated the box office in its opening weekend. Her comedy cred includes the one-and-done Fox series Ben and Kate, and an appearance on The Office.

UPDATE: NBC has confirmed that Alabama Shakes will serve as musical guest during Johnson’s episode; they last graced the Studio 8H stage in February 2013.