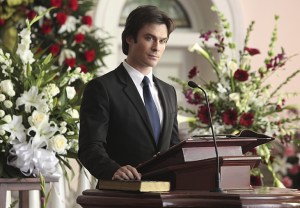 Funerals have become regular occurrences on The Vampire Diaries, but Thursday’s fond farewell to Sheriff Forbes (The CW, 8/7c) looks to be especially devastating.

Ten new photos offer our first look at the heartbreaking tribute to one of Mystic Falls’ finest, and all of your favorites are in attendance — looking their very best, naturally — including Stefan, who appears to share yet another tender moment with his (potential) new girlfriend during the service.

“The two people that are carrying the most weight in the next episode … are Caroline and Damon,” executive producer Julie Plec recently told reporters. “When all is said and done, Liz was sort of a surrogate mother and a best friend to him … and he’s been tasked with the burden of writing a eulogy to stand in front of the entire town and honor his friend.” 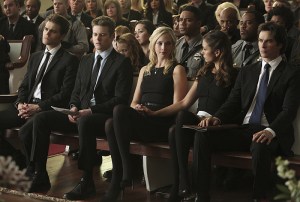 And while Damon’s never short on zingers, he finds himself at a loss for words when it comes to the late, great Liz Forbes.

Plec says, “He’s got a line where he’s like, ‘This is ridiculous. This is having to make me be a nice person, and I’m not a nice person. I don’t want to be a nice person.’ He’s struggling with ‘Hero Damon,’ as always. He wants to do right by his friend … but it’s putting him outside his comfort zone in a way that’s really messing with [him].”

Browse the new photos below, then drop a comment: Are you ready to say goodbye to Sheriff Forbes, once and for all?