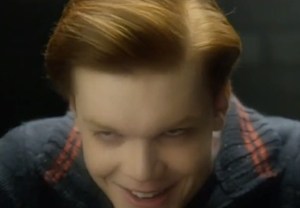 This Monday on Gotham (Fox, 8/7c), Jim and Leslie’s have a date at the circus — and with death.

Because as Ben McKenzie and Morena Baccarin discuss in the exclusive video below, the nascent lovebirds’ night out on the town is soured by murder. And as the case unfolds, viewers will meet the acrobat parents (played by Rob Gorrie and Abbie Snee) of lore’s oneday Dick Grayson aka Robin.

Also glimpsed in the video, as in the promo that’s been airing for “The Blind Fortune Teller,” Shameless‘ Cameron Monaghan makes his debut as Jerome, whose locks, leer and laugh are those of a real joker. But is he the Joker?

“Not necessarily…,” showrunner Bruno Heller tells TVLine, “but it’s not a bait-and-switch or red herring. That character is the true beginning of the Joker saga — the first page of the first chapter of the story that brings the villain known as Joker to life. And that’s what I’ll say about that!”

Press play to see what else McKenzie, Baccarin and Donal Logue have to say.