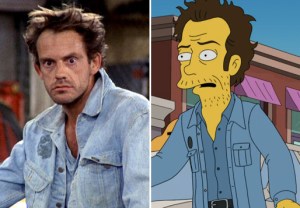 Christopher Lloyd is slipping back into his Taxi this weekend.

When Marge turns her family’s station wagon into a mobile business — think Springfield’s version of Uber — on Sunday’s The Simpsons (Fox, 8/7c), she finds herself at odds with the town’s taxi-driver community. And as writer/director Carolyn Omine points out in TVLine’s exclusive sneak peek, there was no question which iconic TV star should rally the cabbies against her.

Lloyd lends his voice to scorned taxi driver Reverend Jim Ignatowski, the same character he played in the ’70s/’80s sitcom Taxi — which just so happens to have been executive-produced by Simpsons EP James L. Brooks! (OK, maybe it’s not such a coincidence.)

Hit PLAY on the preview clip below to see Lloyd in action, then drop a comment with your thoughts on Lloyd’s epic revival.