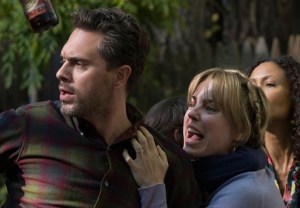 If you’ve seen any of NBC’s recent promos for its new miniseries The Slap, you may have been tricked into thinking that Zachary Quinto’s Harry is the lone bad guy in a group of do-gooders.

But the show’s premiere episode, which debuted Thursday, paints a much different picture.

Early into the hour, it becomes clear that every character in the ensemble is massively flawed, particularly Hector (The Killing‘s Peter Sarsgaard), from whose perspective the episode is told.

It’s easy to sympathize with mild-mannered Hector when he loses out on a major promotion the day before turning 40. But then we learn more about him: He flirts with (and fantasizes about) his wife’s young co-worker; he pops tranquilizers to deal with his family; and his other coping mechanism of choice is cigarettes, even if that means fishing them out of the garbage for a quick smoke break.

But Hector is far from the only character with a faulty moral compass. As Hector’s (very Greek) family and friends arrive to celebrate his birthday, we’re introduced to a wide array of polarizing personalities. Rounding out the group:

* Harry (Quinto), Hector’s temperamental cousin with a wife and child of his own

Tensions rise quickly at Hector’s soiree, culminating in the show’s titular act of violence: When Hugo (who has alternately been kicking, screaming and clinging to his mother since the event began) protests his wiffle ball strikeout by swinging a bat dangerously close to Harry’s son, Harry disciplines the child with a strike across the face.

There isn’t much time left in the hour once Harry does the deed, but it’s clear that a ripple effect has already started spreading through the group: Gary and Rosie threaten to press charges, Koula argues that “the brat deserved it” and Hector, choosing instead to focus on his own love life, breaks things off with Connie and rekindles a flame with his wife, right there on the kitchen table.

Even though Harry is made out to be a villain from the start, it becomes increasingly difficult to root for any of The Slap‘s central characters (least of all Hugo, who is infuriatingly disrespectful throughout the hour). The question is: Will you stick around to see what happens next?

Before you answer, grade The Slap‘s series premiere in our poll below, then hit the comments with your initial thoughts on the episode.