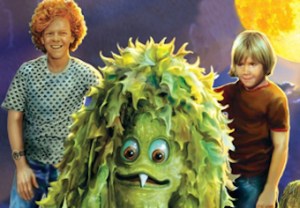 Invest in foam rubber futures now, because Amazon Studios has inked a deal with Sid and Marty Krofft to “reimagine” their live-action 1970s kids show Sigmund and the Sea Monsters.

“Sid and Marty are geniuses,” Amazon Studios VP Roy Price said in announcing the pilot order, “and we are honored to be working with them to bring to the world a return of what we believe is TV’s most fabulous and funniest sea creature ever.”

The Kroffts’ dominion over the Saturday morning TV airwaves/my young life began in 1969, with NBC’s H.R. Pufnstuf (and yes, Witchiepoo haunted me). The brothers followed that up in 1970 with The Bugaloos (meh, I wasn’t a fan), while Sigmund and Land of the Lost (remind me again how the Marshalls’ uncle landed the same place as their dad…?) made their debuts in 1974 and 1975, respectively.

The Kroffts’ later kid-centric efforts included Far Out Space Nuts, Lost Saucer and The Krofft Supershow, while their primetime contributions include The Donny and Marie Show, The Brady Bunch Variety Hour, Pink Lady and Jeff and Barbara Mandrell & the Mandrell Sisters.

Are you intrigued by the prospect of introducing your rugrats to trippy Sigmund and friends?