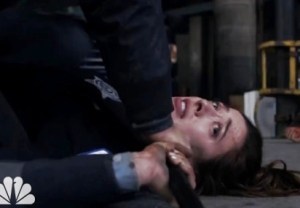 A case of extremely bad luck will continue to follow Burgess on next Wednesday’s Chicago P.D.

Not only was she shot earlier this season, but as seen in the following exclusive video, next week’s hour (NBC, 10/9c) will find the kidnapped street cop in a violent struggle with her captor.

Burgess fights valiantly in an attempt to get the upperhand and retrieve her gun, but will it be enough? Or will her weapon end up in the wrong hands?

Press PLAY to find out, then hit the comments with your prayers for Burgess (and her boyfriend Ruzek, who is no doubt having heart palpitations somewhere).