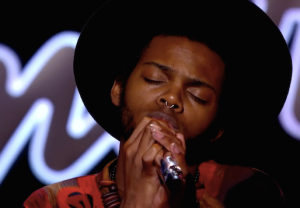 Blood flowed like it was spilling forth from The Shining‘s elevator doors on Thursday night’s installment of American Idol — except there was no need to cover your eyes in horror.

The carnage, as it turns out, was mostly self-induced. “Big Ron” Wilson threw shade at band leader Rickey Minor like he’d bumped his head and woke up channeling Oscar winner Jennifer Hudson in Dreamgirls. That bespectacled chick with the purple hair garbled her words and then went the “America’s the one who lost out!” route after she got sent to the guillotine.

And Carlos Santana’s nephew — while clearly talented — got his come-uppance for bitchily declaring his “Free Fallin'” cover had somehow attained the peak of originality by not sounding like “another blonde girl from Nashville.” (Dude, why don’t you Google Janelle Arthur — and then show some respect for those who paved the way for your own Idol journey, mmmkay?)

But before you begin to wonder “Why’s this recap starting off so cantankerous?!” — FYI, #IWokeUpLikeThis — let me switch gears. The Final Solos round of Season 14 Hollywood Week actually gave the Idoloonie Nation more cause for celebration.

You like White Guys With Guitars? (Not that there’s anything wrong with it.) Season 14 has got ya covered. You dig soulful, fashion-forward fellas? Step up — because there are multiple options. There are also squeezable teen moppets, ethereal divas (with super sexy dads), country chicks, soul sisters and grown-ass men who make J.Lo re-enact facial expressions from The Boy Next Door. And I’m sure I’m missing at least a half-dozen other boxes into which the Season 14 hopefuls would prefer not to be contained.

Sure, the judges could ruin everything next week when they narrow the field from 48 down to 24 — as is often their speciality — but for now, optimism reigns in The House That Launched the Stars of Faking It and Scorpion. (Except for the part where Jess Lamb got cut SANS EXPLANATION!)

So on that note, let me cut straight to the chase and list the eight best things that happened on tonight’s installment of Idol (leaving plenty of room for you to disagree down in the comments):

Thanks to HTGAWM recap duty, I didn’t have time to give full performance reviews — I’ll do that on next Monday’s Reality Check. So until then, I pass the mic to you. What did you think of this Thursday’s Idol? Who were your faves? Who’d have gotten your “veto”? Sound off in the comments!
https://www.youtube.com/watch?v=Z86o1NEvYFM