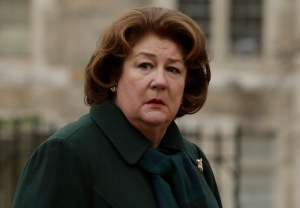 The Americans‘ original handler is back.

Margo Martindale will reprise her role as the Jennings’ ex-KGB supervisor Claudia in a Season 3 episode of the FX spy drama, TVLine has learned exclusively.

“We couldn’t be more thrilled and grateful for Margo’s return as Claudia in the third season,” executive producers Joe Weisberg and Joel Fields tell TVLine. “It was an immense joy to have her in our first two seasons, so to work with her again is a wonderful stroke of good fortune. And all we had to do was ask nicely! And promise no one would punch her in the face again!”

Claudia was last seen in the Season 2 finale, telling her former assets Philip and Elizabeth that The Center wants their daughter Paige to become part of the second-generation legals program.

Martindale has earned two Emmy Award nominations for her performance on the FX series. She most recently starred on the CBS sitcom The Millers, which was abruptly canceled in November.

Are you excited for Claudia’s return? (Here’s hoping it doesn’t involve another butt-kicking from Elizabeth.)