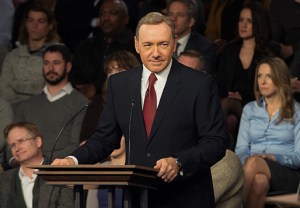 What seemed at first to be an ace up Netflix’s sleeve was ultimately nothing but a Joker.

Two weeks before House of Cards Season 3 was set to premiere, 10 of the 13 episodes landed on the streaming service Wednesday afternoon.

Though the release at first seemed intentional — spurring as it did a social media frenzy among fans of the political drama — Netflix ultimately pulled all available Season 3 episodes within 20 minutes.

This is Washington. There's always a leak. All 13 episodes will launch February 27.

A representative for the show added, “Due to a technical glitch, some Frank Underwood fans got a sneak peek. He’ll be back on Netflix on Feb. 27,” as scheduled.

House of Cards fans, did you catch any of the new season before it was taken down? And do you think the leak was merely an attempt to drum up buzz?