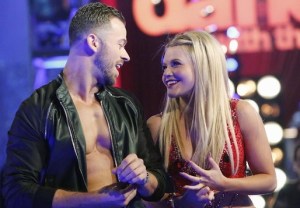 Dancing With the Stars Season 20 will hit the floor minus two familiar pro faces but also bring back a champion, it was announced Wednesday on ABC’s Good Morning America.

As previously reported, neither Derek Hough nor Cheryl Burke are participating in the competition’s 10th anniversary season, which kicks off Monday, March 16. To that end, producers made a point to lure back a departed pro — so Kym Johnson, who won both Season 9 (with Donny Osmond) Season 12 (with Hines Ward) and last competed in Season 16 (making it to the semis with Ingo Rademacher), is returning to the parquet.

All told, the pro line-up — save for two yet-to-be-revealed names — is as follows; the celebrity/”celebrity” cast will be announced on Feb. 24.

Without knowing their “star” partner, is there any pro you’re already rooting for this season?