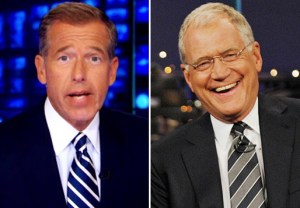 When it comes to making jokes about Brian Williams, even the newsman’s good friends can’t help themselves.

During Tuesday’s Late Show, which was recorded before news of Williams’ six-month suspension was made public, David Letterman targeted him in his nightly Top 10 list, appropriately titled “Top 10 Things Brian Williams Has Said That May Or May Not Be True.”

Enjoy the entire segment in full below:

* Syndicated daytime talk show The Real has been renewed for a second season.