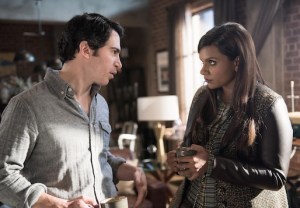 But when Dr. Castellano finally finds out, the news comes from an unexpected source. Grab some ice cream and pickles, and read on for how it all shakes out.

GUESS WHO’S COMING TO MANHATTAN? | When 30 (!) pregnancy tests turn out positive, Mindy can’t ignore the fact that she’s got a Castellano in her slow cooker. But how best to tell the father-to-be, a “Justice Scalia-level Catholic” who jokes about not wanting kids until he’s a senior citizen?

Several attempts via video chat don’t work, so Min decides to jet back to New York for a romantic weekend in the woods with her man. Upon arrival, though, she’s surprised to find Danny’s dad, Alan, and his half-sister, Little Danny, in the apartment.

Little Danny is not the soccer-loving, obedient kid she was when we met her last season (see also: goth-lite wardrobe, slapping of school officials), and Alan starts the visit by asking Danny — aka one of the sons he abandoned 30 years before — for parenting advice.

To my extreme surprise, Danny actually seems flattered and happily volunteers a few tips he gleaned from Growing Pains during Richie’s childhood. (Side note: This ep is great, but it would’ve been even greater with Max Minghella’s Richie on board, no?)

Mindy and Danny cancel their getaway so he can deal with the situation at hand, and when she relays that news to Annette, Ma Castellano invites all of them over for dinner. Still, Danny thinks this is a “family” matter that Mindy doesn’t need to be involved in, and the exclusion smarts. 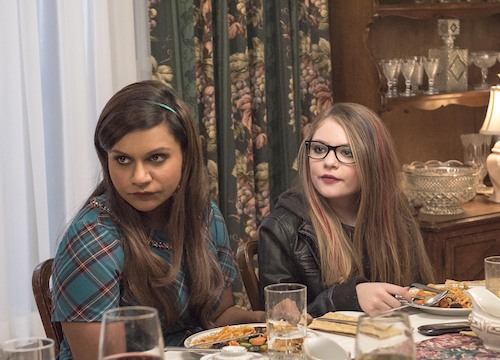 SUCK IT UP, LITTLE DANNY | Time for a buck-up call from Peter (!), who’s eating his weight in red meat in Texas in between bouts of stalking Lauren and her kid. (Side note: Why is he stalking? Didn’t she seem generally agreeable to his moving there in the last episode?) Peter urges his pal to insinuate herself into the Castellanos’ drama: After all, who’s more family than the woman carrying Danny’s baby? So she takes his advice and winds up at Ma’s table in Queens.

The evening goes well enough — Annette sports a platinum wig (because, in her happiness with Dr. Ledreau, “My hair turned blonde, like a princess”), Dot harbors a grudge against Alan that rival’s Annette’s, etc. — until Mindy realizes that Danny is faking her emotional problems.

“Your little sister has learned the age-old tactic of acting like a psycho until she gets what she wants,” Mindy cries. “I know that, because I invented that!”

MA PUTS IT TOGETHER | But Danny reiterates that it’s a Castellano thing, so an unhappy Mindy leaves. Back at the dinner table, Annette is incensed to learn that her deadbeat ex is once again abandoning his family — and that her numbskull son is enabling him — and she runs after Mindy to tell her she’s proud of the (violent) way she dealt with Danny. But while the women are outside, Annette realizes that Mindy’s really warm… and she didn’t have any wine at dinner… and happily deduces that she’s going to be a grandmother! (Side note: I love that the show went with super-Catholic Annette being pleased, rather than upset, about this development.)

Ma runs back inside and tells Danny the news (A+ for your reaction face, Chris Messina), so Dr. C searches everywhere for his girlfriend before finding her at the hospital doctors’ lounge, passed out in a pile of vending-machine apple-pie wrappers.

While it’s no airplane galley hook-up, the hug he gives her is damn near close. And when he says, “We’re a family” with his palm splayed over her belly, I. Am. Done.

What did you think of the episode? Got a favorite line I didn’t mention? Sound off in the comments!