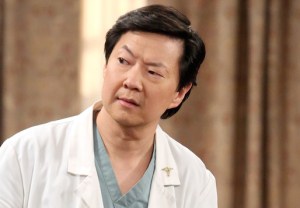 ABC has made an appointment with Dr. Ken, a comedy pilot starring Community‘s Ken Jeong.

Penned by Jeong — who in real life has his M.D. degree from the University of North Carolina at Chapel Hill — Jared Stern (Mr. Popper’s Penguins) and Funny or Die’s Mike O’Connell, the project stars Jeong as a frustrated HMO doctor who is juggling medicine, marriage and parenting — and succeeding at none of them.