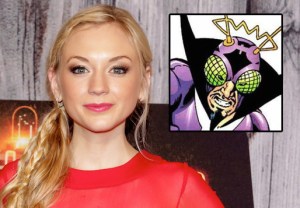 The Flash is putting a gender twist on DC Comics’ Bug-Eyed Bandit.

The Walking Dead alumna Emily Kinney has been cast as the typically male nemesis of The Atom, TVLine has confirmed.

Kinney will appear in Episode 18, “All-Star Team-Up,” as Brie Larvan — fka Bertram in comics lore — when Arrow‘s Ray Palmer and Felicity visit Central City for help with his A.T.O.M. exosuit.

Brie is described as a narcissistic tech wizard wreaking havoc in Central City. Upon arriving in town, Felicity recognizes Brie as her nemesis, and the two women engage in a hacker battle for The Flash’s life.

As TVLine previously reported, Kinney will also guest-star on an upcoming episode of ABC’s Forever.