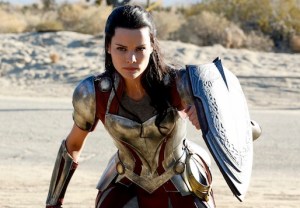 Jaimie Alexander will again bring Thor‘s Lady Sif to ABC’s Agents of S.H.I.E.L.D. — though there won’t be much opportunity for a trip down memory lane with Coulson & Co.

Because when Lady Sif resurfaces in the series’ second episode back (airing March 10), she will have lost her short-term memory, meaning she knows nothing of Thor, let alone what/who she is back on Earth to thwart.

“[W]e’re going to have fun with that,” executive producer Jeffrey Bell tells TV Insider, which first reported on Alexander’s encore. “It’ll give us some much-needed humor in a season that’s been full of betrayal and death.”

Also curious: Before Coulson’s team is able to reunite with the Asgardian, TV Insider says she will have engaged in a “bodyslamming showdown” with a superpowered foe whose identity the ABC series is keeping under wraps. Theories?