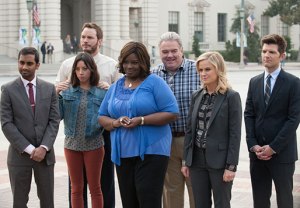 Parks and Recreation‘s swan song will include a stop by Late Night With Seth Meyers.

The entire cast, plus executive producer Michael Schur, will be guests on the nighttime NBC talker on Tuesday, Feb. 24.

* Showtime has pushed back the Season 2 premiere of Penny Dreadful from April 26 to Sunday, May 3 at 10 pm.

* ABC has give a six-episode order to an updated version of Comedy Central’s BattleBots, which featured homemade robots battling against each, our sister site Deadline reports. The new series will air this summer.

* Per The Wrap, sister networks Universal HD and Cloo will marathon all 57 episodes of Suits, starting Monday, Feb. 16 at 12:30 pm and leading into star Patrick J. Adams’ directorial debut, which airs Feb. 18 at 10 pm on USA Network.

* Bath time will never be the same… Check out the latest trailer for Season 2 of WGN America’s Salem, returning April 5.