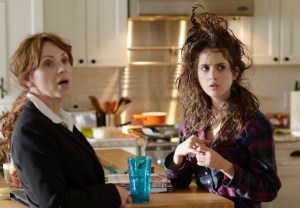 On the horizon for Disney Channel star Laura Marano is one Bad Hair Day and an eventual goodbye, as Austin & Ally continues its fourth and final season this Sunday at 8/7c.

TVLine met up with the 19-year-old actress/singer to tease Bad Hair (which is available now via Disney On Demand and Watch Disney, and premieres Friday the 13th on Disney Channel), survey some big changes for Austin & Ally and make note of her most un-Disneylike behavior. (Worry not, kids – it’s quite family friendly.)

TVLINE | How are we describing Bad Hair Day? “What meets what”?
I would say it’s a family version of The Heat [the 2013 film comedy starring Sandra Bullock and Melissa McCarthy]. It is nothing like Disney Channel has done before, in that it’s an action/buddy cop comedy. It’s my character Monica’s worst day ever, and it happens to be the day of prom. Her dress melts, her shoes have exploded, and her hair, hence the title, is really, really bad.

TVLINE | For any particular reason…?
Monica does these polls online about what dress she should wear to prom, what shoes, what hairstyle…. She does all these crazy things to her hair, mixing all sorts of products, and really horrible hair is the result. It’s funny because as soon as I put that wig on, the crew looked at me in a completely different way — like, “Oh my goodness gracious.” I’m like, “Yeah, that’s me.”

TVLINE | Leigh-Allyn Baker plays a cop who drags Monica into a search for stolen jewels, and she also executive-produced this. You obviously knew her work from Good Luck, Charlie, but had you ever bumped into each other at events?
She probably doesn’t remember it because it was years and years ago, but when we were filming the pilot of Austin & Ally, Ross [Lynch] and I decided to go to a taping of Good Luck, Charlie, and so we met [that cast] afterwards. But Leigh-Allyn and I really, officially met at the Radio Disney Music Awards [in April]. And while I had no idea, she always tells me that when she was there, she was quietly stalking me because she really wanted me to do this movie. As it turns out, we were a really, really good team.

TVLINE | In filming this action/buddy cop comedy, were there any firsts for you as an actress?
Yes – and I don’t think I will ever do it again, because it was so scary. I actually did my own stunt driving, where I had to drive 40 miles per hour on a sidewalk, with people in front of me. They were stunt people, but I had to not brake and just trust that they were going to jump out of the way. They were like, “Laura, don’t worry,” but I was petrified. 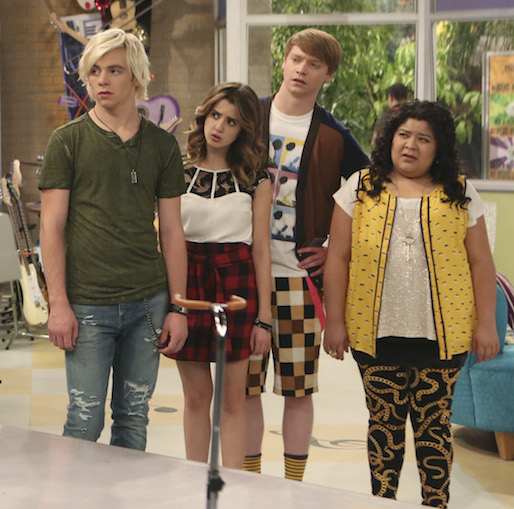 TVLINE | Turning to Austin & Ally: This Sunday, Sonic Boom becomes a music school. That seems like a big shift for the show.
It’s a huge shift. I mean, it’s a complete change for not only the storylines, but also the sets. Raini [Rodriguez, who plays Trish] and I were actually a little sad at first, like, “This is where we grew up! We’ll always miss the bannister!” But we’ve learned to love [the Music Factory set], with its lounge and everything. The sign looks really awesome.

TVLINE | Storytelling-wise, it must open up some things.
Oh, completely. I mean, I think we were stuck for a bit – like, how long can we continue with Sonic Boom? Especially because Ally’s now kind of a superstar as well, so it would be hard for her to work there. It was definitely very necessary for our storytelling.

TVLINE | Aside from Ally, which other character would you want to play?
We haven’t had him on in a while, but Nelson, played by Cole Sand. The “Aw, nards!” kid. I just want to know what it’s like to be that adorable for a day.

TVLINE | So, this is the final season?
This is the final season, so it’s bittersweet. We always kind of compare it too our senior year of high school. We’re moving on from these friendships, these really kind of family relationships that we have gained through the years, but it’s like, “We’re moving onto college.” I’m really excited about the future. I’m going to be pursuing music — I’m going to have an album coming out this year — but it’s really sad because I love my cast members and the crew we work with.

TVLINE | Have you shot the finale yet (to air in early 2016)?
No, but I kind of know what the finale’s going to be like. The producers told us, and it’s really good. I’m excited.

TVLINE | Are you “one and done” when it comes to Disney series, or might you pull a Zendaya and star in a second one?
I’m always open. I know I really want to focus on music, and that’s sometimes hard when you’re on a series. I also want to continue onto college; I graduated high school last year, 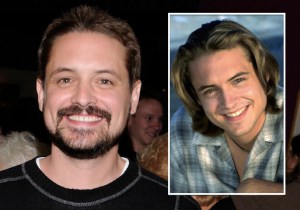 which was very stressful. But there’s a definite excitement for me to pursue music right now.

TVLINE | Are there any other Disney Channel shows that you keep tabs on?
Girl Meets World. Helloooo, I’m the biggest Boy Meets World fan, so Raini and I are obsessed with Will Friedle, who played Corey’s brother. So when we found out he was going to be on [Girl Meets World in Season 2], we were like, “Guys, we need to do a crossover ASAP, and he needs to be in it!” We’re obsessed.

TVLINE | You sister Vanessa stars on ABC Family’s Switched at Birth – do you ‘ship Bay and Emmett?
Yes. Well, actually… I don’t know. I always loved Bay and Ty, too. 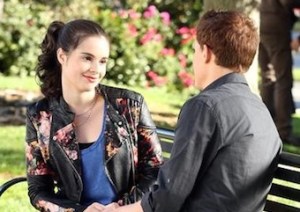 Like, Ty was her first guy there. I ‘ship Bay with a lot of guys. Is that weird? She’s actually had a lot of boyfriends.

TVLINE | What other primetime shows do you like?
Empire — I’m obsessed with it. Oh my gosh. Taraji [P. Henson] steals it, she’s amazing. I also love Homeland, Game of Thrones, The Newsroom, Modern Family [which costars Rain’s brother Rico]…. And I’m binge-watching The Office right now on Netflix. We actually had someone from The Office guest-star on Austin & Ally, but it hasn’t come out yet – Leslie David Baker, the guy who plays Stanley. I was star-struck.

TVLINE | And lastly, what’s the most “un-Disney” thing you’ve recently done?
Let me think…. Oh, I know something really edgy that I did. Are you ready? OK. I did these stick-on tattoos [on my arm], with like a silver, diagonal pattern. I was like, “I don’t know. Can the world handle me right now?! I don’t think it can.” I was doing a photo shoot, and I was like, “Bam! Look at my arm.”